What have we missed?

I cannot think of any situation such as the Greek bailout, where the informed condemnation is so clear and unequivocal - and almost unanimous. You will be extremely hard put to find anyone outside the bubble who thinks the deal will work, and most think it will not hold more than a few months.

Perhaps the most entertaining, if not definitive piece comes from The Washington Post which has asked a group of experts and economists to pronounce on it.

We start with Kevin Featherstone, professor of contemporary Greek studies at the London School of Economics. "With this deal", he says, "Greece has only overcome the first of several hurdles". Barry Eichengreen, economist at the University of California Berkeley, says simply: "It won't work".

Henry Farrell, associate professor of political science at George Washington University offers a more subtle put-down: "The bailout will work", he says, "if by 'working' you mean putting off the really hard decisions for another month or two".

Dmitri Vayanos, professor of finance at the London School of Economics, is kinder, but still not very encouraging: "While the bailout plan takes care of Greece's funding needs in the short run and puts Greek banks on a sounder footing", he says, "it does not offer a full solution to Greece's problems".

Nicolas Veron, senior fellow at Bruegel, a Brussels-based think tank, is not too far away from that: "This agreement does not set Greece on a sustainable track, and more pain is sure to come down the road …". Yet Mohammed el-Erian, co-chief executive of Pimco is more blunt: " … this agreement is likely to follow its predecessors and fall apart in the weeks ahead".

Richard Portes, economist at London Business School says: "The bailout will fail even if debt restructuring attracts sufficient creditor support now and CDS are not triggered (both uncertain). Debt reduction seriously inadequate. Greece will need more official support, sooner rather than later. The politics are poisonous too, in Greece and in eurozone".

And so on, and on and on it goes. Anywhere you look, you will get the same sentiments. Even the great Gavin Hewitt, on the europhile BBC, can only offer the view that the "colleagues" are buying time (above) – a sentiment shared by many others.

Now, if this bailout is so awful that even the BBC can see it, and we know that the "colleagues" include amongst their number some extremely bright cookies, the fatal weaknesses of the deal must be obvious to them as well. So who are they trying to fool? 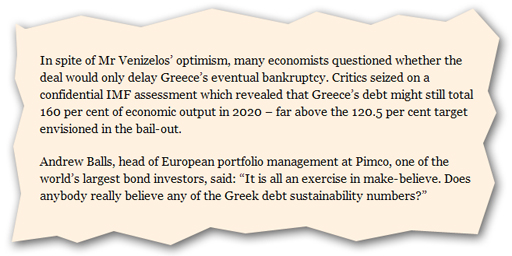 Therein lies the mystery. One should always beware of the obvious, and with so many commentators patting themselves on the back for their perspicacity – including me – there is the danger that we are missing something.

That "something" is the next step. The "colleagues" really are not that stupid, and if it is so transparent to us all that the deal cannot work, they surely must have something in reserve … a "plan B".

An alternative, of course, is that there really is nothing left in the locker - that this is the last, despairing fling to stave off the inevitable. But, with their Houdini-like skills for escaping from impossible situations, it is hard to believe that. It is all very well, therefore, for these clever people pontificating about how bad the bailout deal is, and how certain it is to fail. Even the dimmest of us knows that by now. Thus, the question stands: what have we missed?