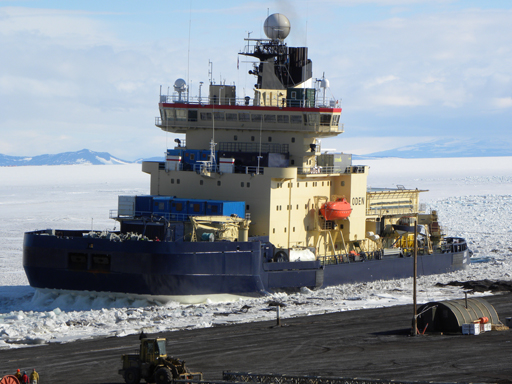 Picked up by Autonomous Mind, the expectation of increasing sea ice in the Baltic this winter has resulted in Sweden withholding an icebreaker from use in Antarctica by the US National Science Foundation (NSF). This comes after the dramas in the Gulf of Finland and the Okhotsk Sea, which have completely confounded the warmists who have been predicting ice-free passages brought about by global warming.

But, as AM reports, the increasingly bitter winters that have resulted in more iced-over navigation passages. Having to deal with the real world, rather than the fantasy construct beloved of the warmists, the Swedish government thus wrote to US Secretary of State, Hilary Clinton, to announce that the icebreaker Oden (pictured) will be kept at home and not be made available to support the work of the NSF in Antarctica, for the first time since 2006.

The detail comes from the journal Science, announcing the abrupt end of an ongoing agreement with the NSF for the lease of the Oden, the pride of the Swedish icebreaking fleet and also the world's most capable non-nuclear polar-class research vessel.

NSF has used the ship each winter since 2006–07 to clear a path through the sea ice to resupply McMurdo Station, the largest scientific outpost in Antarctica and the hub for US activities on the continent. The Swedish government decided that the Oden needed to stay at home this coming winter after two harsh winters disrupted shipping lanes in the region.

And this is indeed what happens when the real world intrudes. The warmists can sit in front of their nice warm computers and run models until the end of time, but if the ice refuses to obey the predictions, real world solutions such as icebreakers must be employed. As real people in that real world are only too well aware, you can't eat computer models.