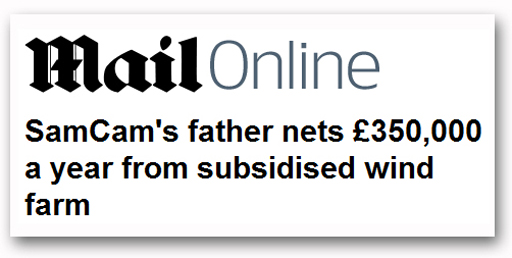 The Green Tosser's wealthy father-in-law, Sir Reginald Sheffield, is said to be ripping off almost £350,000 a year from a subsidised wind farm on his country estate – equivalent in value to about 1,000 wide-screen plasma TVs each and every year.

Sheffield, who is said to be worth £20million, creams off the dosh from the consortium which owns the wind farm – just for having the bird choppers on his land. The 65-year-old looter calls it a "modest" fraction of the estimated £3.5million the eight 400ft-high turbines generate each year.

The loot itself comes from ordinary electricity consumers, including cash-strapped OAPs, who were recently told that they were to lose £100 from their winter fuel allowances.

No wonder thieving scum like Sheffield and his son-in-law are so keen on global warming. And there is little chance that they will consider voluntary abstinence. When they can loot wholesale from the comfort of their own homes, they are saved the inconvenience of having to trash the local Dixons and mix with the serfs.

But if they ever gave it a thought, they might just realise why us serfs have such contempt for them.