As hypocritical as the Guardian 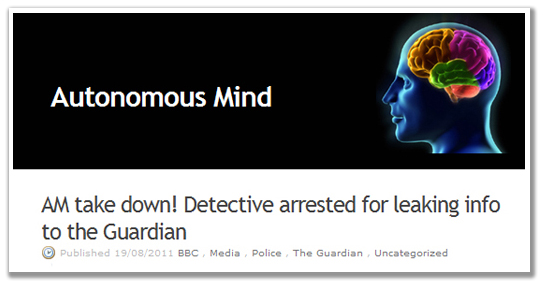 Breaking new ground, in already swampy territory, is The Guardian newspaper. Having taken the lead in accusing the NOTW over its information-gathering techniques, it is now in the frame itself for its relationship with a 51-year-old Scotland Yard detective.

The officer, a detective constable reportedly working on Operation Weeting, allegedly passed information about the NOTW probe to the newspaper in the latest twist in the phone hacking scandal.

Autonomous Mind, who has been ploughing a solitary furrow on this, has the story, which is also carried by the Daily Mail. And, while The Guardian also reports that "a police detective has been arrested on suspicion of leaking details about Scotland Yard's phone-hacking investigation", it has declined to comment on the reports that the leaks had been to the er … Guardian.

As AM also notes, the Guardian's representative on Earth, the BBC, has also been rather reluctant to finger its role model, despite Sky News and The Times gleefully reporting the details, with The Sun sounding suspiciously like it is crowing.

That the latter three are Murdoch enterprises is, of course, entirely a coincidence, but it does rather go to show that news is a variable quantity, its nature depending on who is reporting it. With that, it would begin to appear that there is nothing quite so hypocritical as The Guardian - unless you are thinking of the BBC. But then we knew that already ... Dellers told us.