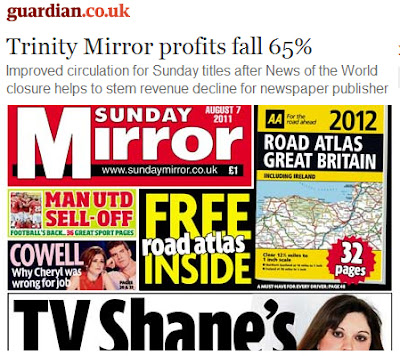 The Guardian reports that the Trinity Mirror Group has seen a 65 percent plunge in pre-tax profits to £28.9m in the first half of the year – helpfully reminding us that the print media is part of a failing industry, with declining circulation and authority.

Even though, as predicted, the loss of the NOTW has helped stems losses (although, probably only temporarily), the papers in the group continue to haemorrhage, with readers deserting in their droves. Amusingly though, Dellers also has a go at the media, telling us:


Our world is on the edge of a precipice. The last thing we need right now is to let the very media institutions which helped bring us to this pass – that means YOU, Guardian, BBC, New York Times, etc – drag us over the cliff with their irrelevant values, falling audiences and failed, suicidal ideologies.

He does not include the Failygraph on its list, but then how could he – a central limitation of the clog, where punches must always be pulled on certain subjects. The worst of it is, though, that BBC News audiences have soared, as people turn to the television for information, acquiring thus a dose of BBC values.

It is the print media, therefore, which is most losing out – the place where reasoned comment and intelligent discussion might be seen but rarely is, in an industry where the best they can offer is Osborne – late, derivative and less informative than the blogs.

Blog circulation, meanwhile, is increasing – still a tiny fraction of the print media's reach – but at least we have not been damaged (as some feared) by the emergence of the so-called "superblogs". It is troubling that so many people still turn to the media for their comment, as Dellers is right. The last thing we need are the very media institutions which have so egregiously failed us.

They, alongside the police and the politicians, are also responsible for our current problems – and you will not see a failing industry offer any sensible solutions. Their day has come and gone. But, in truth, the day of the blogs has yet to arrive.