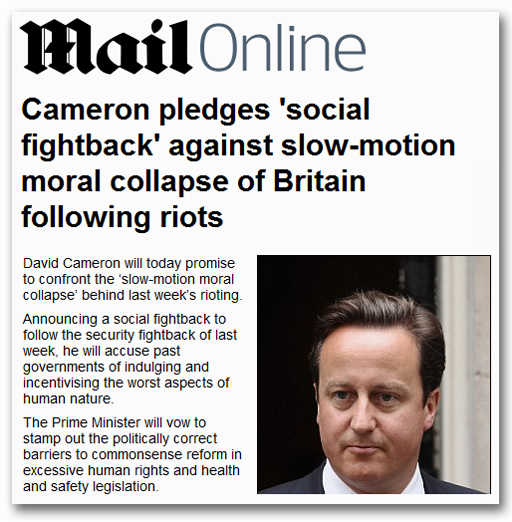 Big Brave Cameron, safe behind his concrete barricades, protected by phalanxes of armed guards and conveyed by armoured limousine in the style of the best of the African dictators, is going to reach down to us mere plebs today and launch his "fightback" against what he calls the "slow-motion moral collapse of Britain".

The stench of hypocrisy clearly does not permeate the hallowed halls of Westminster, or the portals of Downing Street, or offend the delicate nostrils of the plump Old Etonian and his gilded pals.

But, as we navigate our way past the rotting corpse of public policy, we cannot help but offer a wry smile at "the plans for a crackdown on the criminal gangs behind the riots". Their members, it would appear, will be subjected to "an orchestrated campaign of harassment by officials from all government agencies" to drive them from the grip of the gunmen.

In a land of "equal opportunity", it seems that the gangs are now to be subjected to the same treatment as the rest of us.

COMMENT: EVEN NEWER RIOTS THREAD
Posted by Richard at 10:29