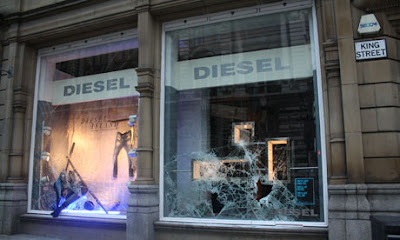 Ursula Nevin, the mother jailed for handling looted shorts has now been freed on appeal, with lawyers now predicting a flood of successful appeals against "hysterical" sentencing.

Judge Andrew Gilbart, the Recorder of Manchester Crown Court ruled that it was "wrong in principle" to jail Nevin, a mother of two, simply for receiving clothing that had been stolen by a looter. Nevin had been left in a "circle of hell" after being jailed for five months. Gilbart ordered her to be released immediately.

After growing concern at the sentences faced by more than 1,300 people who have appeared in court as a result of the rioting, it is the first signal that harsh punishments are set to be overturned. Convicted rioters are being handed prison sentences that are on average 25 per cent longer than normal.

Thus do we enter the next phase of this ongoing debacle. Having left summary "justice" to the magistrates, senior judges are now having to wade in and undo much of their work, simply because the policy and approach has not been thought through.

One does not have to pass judgement as to whether or not those convicted and sentenced deserve their punishments – simply that the policy, such that it is, has been incoherent. Instead of sending a firm signal to the rioters, the magistracy have thus combined to display their incompetence, making the system look stupid and fragile.

Altogether, the handling of the riots and their aftermath, has been crass. The political classes, the judiciary and the police have been unable to craft a proportionate and tempered response.

On the other hand, we see in The Guardian an analytical piece which seems to embody much of the thinking in my earlier piece. Riots, it says, "generally occur when groups have a sense of illegitimacy about how they are treated by others and where they see collective confrontation as the only means of redressing the situation". Thus ...


If, like Cameron, you see riots as an irrational and pathological phenomenon, then the response is first to repress (why reason with those who have no reason?) and second to look for problems inherent within the communities from which the rioters are drawn.

Thus we see the government pledging a series of new repressive police powers such as curfews (which the police themselves don't want) and looking to uncover the source of moral sickness among disaffected youth.

If, however, you see the actions as a meaningful response to a shared sense of illegitimacy and lack of alternatives then you need to address the way in which this has arisen.

That is, you need to look at the experience of relations between rioting communities and those with power, authority and influence in our society. The danger is that the repression agenda not only ignores this but that it actually creates experiences that both increase the sense of illegitimacy and decrease the sense of alternatives.

So the accusation of mindlessness, the lazy language of the "mob", is not just wrong. It is positively dangerous. It stops us paying attention to what crowd actions tells us about how rioters understand their society. It stops us from addressing how these understandings come about. It dooms us to more disaffection, more division and more violence.

I may or may not have put it better. But that is effectively what I have been saying. Get it wrong, and you make it worse. And that is exactly what our masters are doing. It is almost staggering to observe just how stupid they have become.