Less than two weeks ago we saw this after judge Farook Ahmed had cut the sentence of Vincent Miller, illegal immigrant and drug dealer, to help him escape deportation (above). He deliberately shortened the sentence Miller would have received from a year to eleven months. Criminals given twelve months face automatic deportation proceedings. 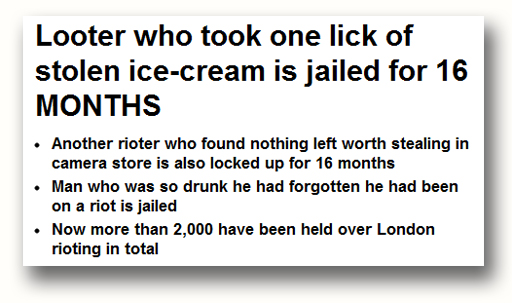 And now, we see this: a looter who took just one lick of an ice cream he stole during rioting before he gave it away has been jailed for sixteen months. Anderson Fernandes, 21, wandered into an upmarket store in central Manchester after the door was left open and helped himself to a cone and two scoops.

But despite giving it to a passer-by because he didn't like the coffee flavour he was still given a lengthy prison term.

And this occurs on the day we see reported that net immigration soared by 20 percent last year. This, says the Daily Mail "is making a mockery of Government pledge to bring it down".

One could venture that what is really behind this is the weak attitiude of government to immigration. When The Man feels threatened, as with the riots and looting, no sentence is too draconian. What a contrast this makes with the laid-back attitude to people who should not even be here.