The looting of the Hill 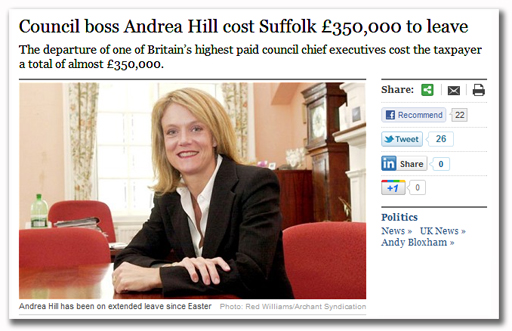 We met this little baggage quite recently but up she pops again, as we learn that Andrea Hill, recently deposed chief executive of Suffolk county council, won a payoff of £218,592 - a year's salary.

But this was not the full cost of her leaving the post. The council, it seems, was also lumbered with a bill of £115,670 to investigate allegations of bullying and her "domineering management style" after David White, the council's interim head of legal services, was found hanged near his home in April.

In addition, the council had to cover legal fees of £13,506 on Hill's case, bringing the total cost of getting rid of her to £347,768. And this is on top of the £405,000 she has cost the council in agreeing settlements for the departure of other members of staff.

Unsurprisingly, Craig Dearden-Phillips, a Lib-Dim councillor, remarks that: "She had to go - her management style was pretty inappropriate". He adds: "It's an expensive settlement but if you counted all the hours spent dealing with this it would have cost far more than £350,000".

Amazingly though, a spokesman for Suffolk council actually says: "The county council would like to thank Mrs Hill for all she has done over the past three years and wish her well for her future". Not a few people, though, would like to make sure that the woman had no future ... of any kind.

Certainly, her kind of wholesale looting puts the efforts of last week's amateurs in the shade, proving that by far the best way of ripping people off and getting away with it is to join a public institution.

Her efforts, however, have not gone unnoticed, and anyone who thinks the moral indignation over the riots is going to cut any ice, as long as excrement like this is stuffing wads of dosh into her knickers, really does not belong on this planet.

If the ruling classes insist on helping themselves to our money, they really should not be surprised when their loose morality is reflected in the lower orders – and many others besides.