I had a look at this story yesterday, and wondered what to make of it. The idea of a plod being dobbed in for failing to nick a scrote in the act of thieving – and then being banged up – sounds so implausible that one feels there has to be more to it.

However, Raedwald thinks he might have an explanation. "When officers start shooting their men to encourage obedience, you know they're in desperate trouble", he writes:


When rank and file police officers see their endemically corrupt seniors get away with gross peculation of public funds, taking lavish bungs from dodgy enterprises, rewarding themselves with bonuses that equal a constable's annual salary, consorting openly with known criminals and stumbling from one silver-braided circle jerk to another, what do you imagine happens to their commitment to risk themselves to protect the public? Senior officers are aware that they've alienated themselves from ordinary plods. So they're seeking to secure by fear the obedience they can't achieve by leadership.

I wouldn't entirely disagree with that, and we have observed before that the establishment seems to be running scared. Certainly, the extraordinary effort being devoted to tracking down the street rioters and looters, and the stiffer than normal sentences being handed down, can be interpreted in a similar vein. These are signs of weakness – fear – rather than strength. 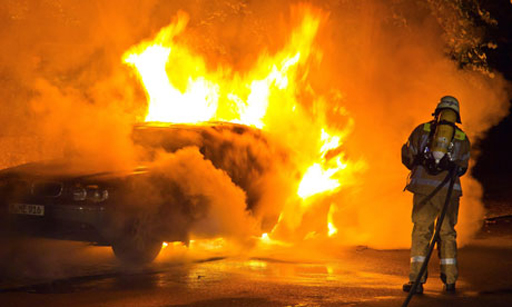 One wonders if they are thinking what we're thinking, that we are on the cusp of a low-grade civil war, the nature of which seems to be continuing in Berlin, where the continuing car burning is now being treated as "politically motivated".

Our own establishment have gone out of their way to brand our troubles as "criminality", which is what they originally tried to do in Berlin. But it hasn't washed there, and it doesn't really wash here. They next time, though, the violence will be harder to dismiss, and our establishment too may well have to admit to political motivation.

But, if Raedwald is right and the senior plod and the politicals are losing touch with the rank and files, then we are in for a torrid time. The distance does beget fear and a frightened plod is a violent plod. But if they give vent to violence, they will be sowing the seeds of their own demise. We are the ones with the power.