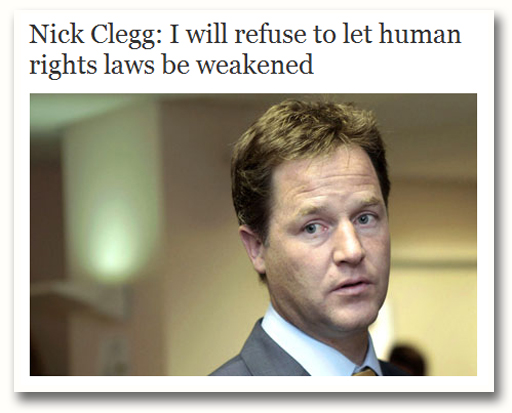 Do you remember when the mantra of "Tory splits" seemed to be the most dominant force in politics, with Labour in full cry at the very hint of them, and the Tory grandees pulling out all the stops to maintain a façade of unity?

And now we have the "coalition", with the Cleggerons totally at odds over a supposedly flagship policy. They are split right down the middle, yet somehow this is not supposed to matter.

Actually, this makes a total nonsense of any idea of coherent government, when the man pretending to be prime minister is being held to ransom by his own deputy who is actively briefing against him.

Meanwhile, while the idiot Boy prattled about clawing back powers from Brussels, he is being undermined by his Business Secretary, Vince Cable, who has "agreed" to a controversial EU directive on agency workers, a measure which is set to cost employers more than £1.8 billion a year.

With that, the very concept of a unified government descends into low farce – a hollow joke. But the tragedy is that the joke is on us, the British people, forced as we are to suffer these posturing buffoons.