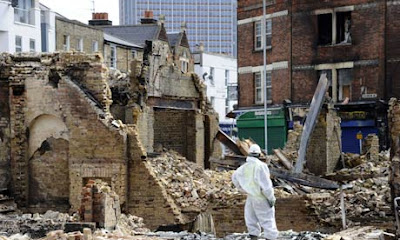 When it comes to quality, you have to give Richard Littlejohn a certain amount of credit. "Every gob-on-a-stick has been wheeled out on the airwaves to give their perspective, most of it drainpipe narrow and all of it overwhelmingly self-serving", he writes. Now, that's quality … quality polemics.

And there, from both sides of the divide on the riots issue, is one of the great problems. A full week has not yet passed since the cessation of violence, and the various camps are lining up with their nostrums, all convinced they know the answers, and all absolutely convinced that everybody else is wrong.

Oddly, Littlejohn himself acknowledges that. "Everyone's got an agenda", he writes. "They are looking at the problem from their own selfish viewpoints", then adding: "The Lib Dems' determination to defend the pernicious Yuman Rites Act, as an article of faith, proves yet again they are not fit to be in government".

What the great scribe does not acknowledge, of course, is that he too has an agenda – although he would be the last person to lay it all out in a coherent form. But his very popularity – and continued employment – rests on him articulating the "hang 'em – flog 'em" tendency of the more bilious Daily Mail readers.

Yet, what none of the EVM manufacturers seem to be doing is standing back and looking at some of the evidence that is pouring in, and assessing how it fits in with preconceived notions as to what caused the riots. And, in that context, we have an interesting anomaly in the man charged with firing the Reeves of Croydon furniture shop, producing that spectacular blaze at the height of the riots.

Far from conforming with the stereotype rioter, we have in the accused, Gordon Thompson, a 33-year-old man – father of two, employed as a painter and decorator. This is hardly the disaffected teenager that Big Brave Cameron wants to target, as his idea for mending his "broken society".

Fortunately for the some, however, their prejudices will be fortified by the knowledge that Thompson is black, thereby confirming to those who want to believe it, that the unrest is a manifestation of a failed immigration policy. Unfortunately, though – despite the magnitude of his alleged crime - we know remarkably little else about Thompson.

Nevertheless, it is fairly certain that Thomson is not the sort of person who is going to benefit from Big Brave Cameron's nostrums. We are hardly likely to see this 33-year-old painter and decorator in a "boot camp" alongside 16-year-olds, taking the compulsory six-week indoctrination required for the modern member of the Cameron Youth.

One thing you don't get from Camp Littlejohn though, is any sense of linkage … our Richard is not terribly good at joining up the dots. What we are seeing though, from him and many others, is the "lions led by donkeys" meme, where we are now encouraged to believe that that the police on the ground were wonderful and brave, and that it was only the incompetence of their senior officers that held them back.

Not for one minute does it seem acknowledged that senior plods come from the ranks of junior plods, and that it is unlikely that incompetence in the senior ranks develops spontaneously. Largely, it permeates the entire structure, being nurtured and developed through the ranks. It may emerge at the top in its finest and most refined form, but there is a plentiful supply at the bottom as well.

Thus, in the quest to seek answers as to why these riots started and what sustained them, the pundits are not actually being much help. Suzanne Moore, for instance, seems as perplexed as the rest of them, even though she lives in Tottenham.

No single solution, she says, can come from Right or Left, then expressing concern about another angry mob, "who are foaming at the mouth with rabid Right-wing authoritarianism". In her book, "Successive governments have made this mess and now we are all in this together. The truth is that what we used to call civic or public society needs not just care but actual rehab".

If you expect any better from local MP David Lammy, however, you are going to be disappointed. From a long interview in The Guardian, you do not get any sense at all that he is on top of the case, or has any real understanding of what is going on.

But, if we do some joining up of dots, we see in the Daily Mail an account of how, "persecuted motorists are being handed five times as many parking tickets as they were a decade ago".

New mobile CCTV cameras are being used to catch drivers who may only have stopped momentarily. One case was based on just 17 seconds of film. There have even been instances of automated fines being generated for moving vehicles. 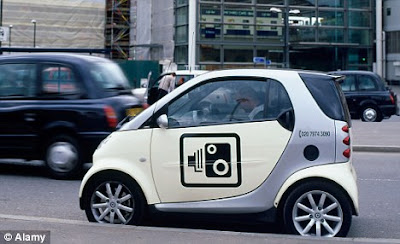 Now, if you want linkage … there it is. We are seeing the mean, authoritarian, money-grubbing side of government, and one which typifies the way it more generally behaves. And as to its impact, never more closer to irrational, "red mist" have I become, with murder in my heart, than in dealing with traffic wardens.

The point here is that you cannot put experiences in little boxes and keep them separate. When some government departments behave like "little Hitlers", they taint the image of government as a whole, creating a long-term, chronic state of antagonism. Basically, relations between government and the people have broken down … and parking enforcement is part of the experience.

Thus, Occam's Razor could well be applied to the causation of these riots. Forget the deeper reasons and the advanced sociology. Put simply, if you piss off enough people, for long enough, at the first and every opportunity, some of them will return the favour. It may be as straightforward and as rational as that. So why did the "niggas" riot and loot? Because it pisses off The Man. Simples.

Inevitably, government is going to piss some people off - and in some instances, as in Somali asylum seekers, it should do just that. But it needs to be careful. If it goes out of its way to piss everybody off (which it is doing very successfully), the disaffection spreads. So far, as I keep saying, the middle classes have not rioted. But when we finally do, we'll do it properly, and put those niggas to shame.