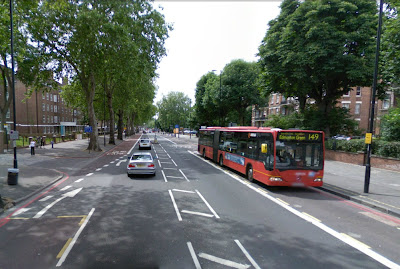 I should have picked this up earlier. Jim writes about the Bradford riots ten years ago, which he reported on for his local paper.

In common with myself, Jim charges that the real culprits are the politicians and their technocratic advisors, in both Brussels and Westminster, who engineered and oversaw the social disaster of the open borders policy, designed to weaken the structure of the nation state; the governing Yahoos who put human rights above human responsibilities.

What I will have no truck with, though, is any half-baked idea that this is directly an immigrant problem, and can speak with some personal authority. I was born in University College Hospital London, spent the first four years of my life in Manor House, and then moved to Stamford Hill (pictured), where I lived until I was eighteen.

I went to school in South Tottenham – primary and then Grammar. Our playing fields were behind the White Hart Lane stadium.

Although having moved to Yorkshire, I have stayed in touch with my roots and, most recently, worked as a consultant for a Tottenham firm, with a boss from Grenada – black as the ace of spades and as nice and decent as they come. He employed both whites and blacks ... including, on my recommendation, a kid from Yorkshire who was having trouble finding a job.

His kids, I knew ... nice kids, decent kids ... worth more than ten white kids that you can pick up off a sink estate. But hey! They were as black as their dad ... so they must be a problem. BS!

Back in Yorkshire ... Bradford. Yes, we have Asians ... and thank goodness we do. It is nearly two years since I started getting chest pains. Went to the GP surgery. Saw the doctor ... saw lots of doctors. Nice white doctors. Friendly, competent but, in this case, useless. They found nothing wrong.

The terrors of the night drove me to calling out the emergency ambulance last year, admitted as a potential heart attack case. Normal test showed up nothing. But an Asian Houseman listened to my chest through his stethoscope, and picked up something ... a heart valve problem that is very hard to diagnose. He did it where the others missed it.

I owe my life to him, and the immigrant surgeon who is going to do open-heart surgery on me shortly, and the immigrant cardiac specialist who has referred me to him, after having done the battery of tests that has found out why I can barely walk to the top of the street. With their skills, I am promised a complete cure.

So no, I am not going to take any bullshit about immigrants – of any colour. The brothers in the paper shop are Asian, Moslems. I would stand alongside them on the barricades any time, taking on the white trash wearing the uniform of West Yorkshire finest, who have given me so much grief.

And don't give me the criminality shit either. For a multi-national, I had to set up a deep cleaning division, and went out of my way to hire lads with criminal records, mostly for GBH – and some thieving. They were the most loyal and hard-working team I ever had.

A lot of the kids on the streets, given a chance, will make good – we've had them through our doors ... Mrs EU Referendum, as a special needs assistant, collected waifs and strays from the sink schools in which she has worked - some of them, in their teens, had never been to the seaside. They have now - you won't get Christmas cards from us. Instead, we saved up our pennies and paid for a mini-bus to send them on trips. Some good, bright kids, gone straight, now have decent jobs and serve the community.

My Missus can hardly go down the street without a "hoodie" rushing up to her to tell her that they have dun good because at a key time in their lives she pinned them against the wall and told them they were lazy shits who were going nowhere.

Then we get all the crap from the multi-kults and the bollocks from Cameron and his new bestist mate Bratton. These are the real scum, the dross who are causing the problems. They ignore the good kids, pour the money and the attention on the trouble-makers, and then give the rest of us grief.

And there is the clever-dick commentariat, up its own arse, telling us what is wrong, and how to fix it. Sorry chaps, you don't know what you are talking about, and by and large you are making the problem worse. Leave us alone and we'll sort it.