Madness "is far too polite a word" 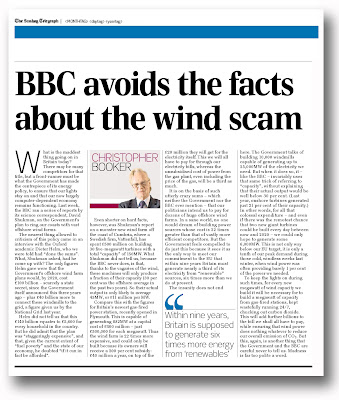 At the moment, writes David Shukman, BBC Environment & science correspondent, "price is the great weakness of offshore wind". Right now, he continues, in a report about the new Ormonde wind farm, "it's the most expensive means of generating electricity, costlier even than nuclear".

Then, and only then does he concede that the power companies "earn" an attractive subsidy for power produced this way, adding that "the costs will find their way on to household bills". Not he, but "critics" then warn that this could make offshore wind highly unpopular (my italics throughout).

And that is as good as it gets from the BBC. You will get no figures, and nothing but these carefully crafted, anodyne statements, which are hardly calculated to inspire the outrage that £40 millions of annual subsidy –114,000 wide-screen plasma TV equivalents – should provoke.

Enter, therefore, Booker, who fills the gaps left by the feline Shukman, asking: "What is the maddest thing going on in Britain today?" And while I did the comparisons with nuclear, working out that the capital cost of wind is six times that of nuclear plant, Booker does it on gas, working out that the capital cost of offshore wind is 22 times that of a gas-fired power station.

Actually, Booker is "wrong" on this, as he has constrained his calculations to gas and wind equipment lasting the same time - a necessary approximation given the space limitations. It is even more entertaining when we calculated on a gas plant lasting at least twice as long as a wind farm. On that basis, offshore wind costs a staggering forty times more than gas to build.

In fact, even that may be over-generous. As this report indicates, wind turbines are not even lasting the planned twenty years – most requiring expensive gearbox repairs after 5-7 years.

This explains why that, despite a 200 percent subsidy, wind operators are still looking for more subsidy, and it is highly likely that the offshore operators will be hit by massive repair costs to keep the current generation of wind farms running. But then, how mad is it parking highly complex and sensitive machinery in one of the most aggressive and dangerous environments in the world?

Madness, Booker concludes in his piece, "is far too polite a word". We could venture "criminal folly", but even that would be too polite. The more appropriate description, however, would be probably be unprintable – for those who prefer words to action. But it is action that is needed, to bring home the malevolent nature of this criminality. By comparison with the subsidy harvesters, the plasma TV looters are pussycats.