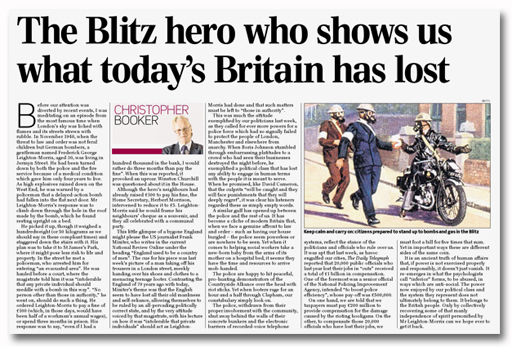 For his column this week, Booker draws heavily on our piece about Leighton-Morris and his bomb. Booker also calls in aid the piece by Frank Miniter, to whom we also refer, noting that his theme was that the English seem to have lost all their old manliness and self-reliance, allowing themselves to be ruled by an all-pervading politically correct state.

This then allows Booker to contrasting the England of 70 years ago with today, Miniter's observations. He then notes the attitude voiced by the 1940 magistrate, with his lecture on how it was "intolerable that private individuals" should act as Leighton-Morris had done and that such matters must be left to "those in authority".

This, says Booker, "was much the attitude exemplified by our politicians last week, as they called for ever more powers for a police force which had so signally failed to protect the people of London, Manchester and elsewhere from anarchy".

Attention is focused on the idiot Boris, who stumbled through embarrassing platitudes to a crowd who had seen their businesses destroyed the night before. This man, in particular, exemplified a political class that has lost any ability to engage in human terms with the people it is meant to serve.

When he promised, like David Cameron, that the culprits "will be caught and they will face punishments that they will deeply regret", it was clear his listeners regarded these as simply empty words.

What Booker then does is make some further links, the nature of which so few of the commentariat seem to understand. A similar gulf, he says, has opened up between the police and the rest of us.

It has become a cliché of modern Britain that, when we face a genuine affront to law and order – such as having our house burgled – the police seem powerless or are nowhere to be seen. Yet when it comes to helping social workers take a new-born baby from the arms of its mother on a hospital bed, it seems they have the time and resources to arrive mob-handed.

The police are happy to hit peaceful, pro-hunting demonstrators of the Countryside Alliance over the head with riot sticks. Yet when looters rage for an hour and a half through Clapham, our constabulary simply look on. Thus, Booker continues:


The police, withdrawn from their proper involvement with the community, shut away behind the walls of their concrete bunkers and the electronic barriers of recorded-voice telephone systems, reflect the stance of the politicians and officials who rule over us.

It was apt that last week, as havoc engulfed our cities, The Daily Telegraph reported that 20,000 public officials who last year lost their jobs in "cuts" received a total of £1 billion in compensation. One of the foremost was a senior official of the National Policing Improvement Agency, intended “to boost police efficiency”, whose pay-off was £500,000.

On one hand, we are told that we taxpayers must pay £200 million to provide compensation for the damage caused by the rioting hooligans. On the other, to compensate those 20,000 officials who have lost their jobs, we must foot a bill for five times that sum. Yet in important ways these are different sides of the same coin.

Booker then concludes that it is an ancient truth of human affairs that, if power is not exercised properly and responsibly, it doesn’t just vanish. It re-emerges in what the psychologists call "inferior" forms, to be abused, in ways which are anti-social.

The power now enjoyed by our political class and the system they represent does not ultimately belong to them. It belongs to the British people. Only by collectively recovering some of that manly independence of spirit personified by Mr Leighton-Morris can we hope ever to get it.

Interestingly, though, Booker is by no means the only writer this week to refer to the Blitz, with many newspapers having mentions of the "Blitz spirit", mostly in the context of Londoners reacting to the rioters and looters. However, one writer makes the point that looting was very much part of the Blitz, making it part of that self-same "Blitz spirit".

The writer is Gavin Mortimer, but he also misses a trick, as there is evidence that there were a number of riots during the Blitz. One such was so serious that it was reported directly to the War Cabinet – on 21 October 1940.

It arose in respect of the then notorious Stepney shelter, where work had been going on to make much-needed structural improvements. But when an air raid warning had sounded, the shelter had not been opened quickly. Fighting had broken out and a breakaway group had attempted to rush the ARP Control Office in Stepney. 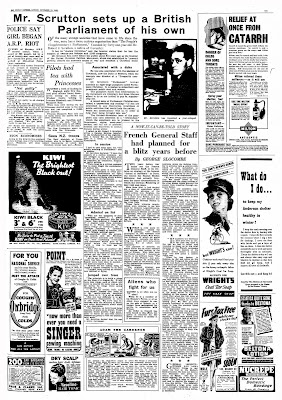 The Police had drawn their truncheons, and a number of [men] people had been arrested, leading to strident complaints from the Daily Worker.

The incident was latterly reported by the Sunday Express (pictured - click to enlarge) on 10 November 1940, after a hearing at Old Street Police Court, when the ring leaders of "riot", comprising 200 people, had been up before the magistrates. Then, it was reported that the riot had been led by a 21-year-old girl, by the name of Alice Kirson.

Given also that the Blitz was celebrated by a massive outbreak of civil disobedience as people ignored the government's prohibition on the use of Underground stations as air raid shelters, the rioters and looters of last week, alongside Mr Leighton-Morris, perhaps better embody the Blitz spirit than the examples cited – all having in common a rejection of authority.

Invariably, though, government tends to resent any challenge to its authority, even where the intent is benign and the deed heroic. If the Blitz spirit is to be invoked, therefore, its best manifestation would be the Leighton-Morris model, where two fingers were politely raised, all in the greater interest of the public good.

With as much charm and firmness, we need to re-acquire the fortitude to do the same.

COMMENT: EVEN NEWER RIOTS THREAD
Posted by Richard at 00:27