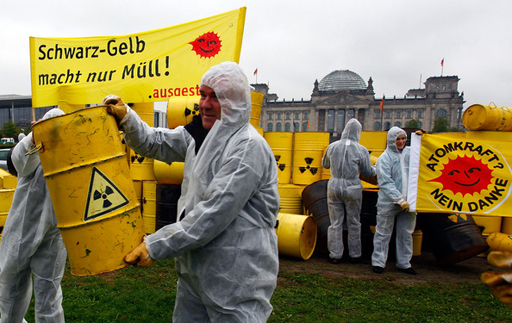 Anyone who says they completely understands the UK energy market is probably either lying or misinformed (or both). The great unknown, of course, is the effect of the loss of about 22GW of capacity, through the phase-out of the large combustion plants and obsolete nukes.

But, if the expectations are of an energy meltdown, it would appear that we can get some idea of what might happen from Germany, which is ahead of the game in shutting down a goodly proportion of its power industry.

As reported by the WSJ, this is the "accelerated exit from nuclear energy" and, according to the country's energy-network regulator, it has considerably increased the risk of power blackouts.

The Federal Network Agency, known as the Bundesnetzagentur, said bringing forward the country's planned gradual exit from all nuclear power to the end of 2022 -which includes the immediate and permanent closure of eight reactors - requires using all available power-production reserves to help balance power demand and supply to stabilise grids.

Bundesnetzagentur president Matthias Kurth and the country's power-transmission grid operators have warned the shutdown of nearly half of Germany's 17 reactors - or around 8.4 GW of generation capacity - could result in large-scale blackouts. Grid stability could be at risk especially in winter months, when demand is particularly high, Kurth says.

And if that is the result of 8.4GW dropping out of the system, we might have a torrid time with 22GW. And, as German experience indicates, the effects will not be uniform.

Southern Germany, which had relied heavily on nuclear power and where industrial energy demand is higher than in the north, is particularly prone to grid instability and blackouts. Not only is capacity going to need adjusting, but the grid is going to require considerable development to avoid network failures.

Despite this, Kurth remains optimistic that the situation is manageable, on the basis that several thermal-power plants can be operated as reserve capacity to bridge supply bottlenecks. This means coal, gas and oil-fired generation capacity – i.e., fossil fuels.

But what is of very great interest to us is that, without the nuclear capacity, the Germans are looking to allow some coal-fired power plants in western and central Germany to operate longer than previously planned. Now that may well bump up against the EU's Large Combustion Plant Directive, which is set to knock out better than 11GW from the British estate.

If the Germans are going to take on this directive, then there may be some hope that we can do likewise, which may relieve some of the pressure while we wait for our own nukes to be built. However, there is also much reliance on renewables, with all the system instability that that brings, which probably makes the German estimations rather optimistic. Even with plant extensions, power cuts seem almost inevitable.

But a darkened Germany, in the grip of prolonged power cuts will not be a happy place. As a result, the recent spate of car burning may be the least of their problems. And then it will be our turn.