Too thick to learn 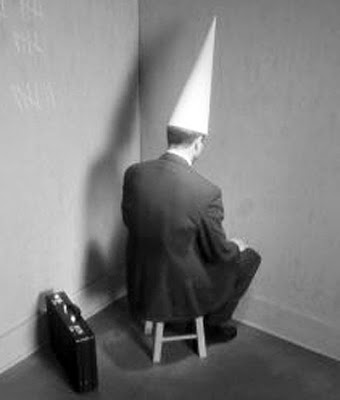 Two recent offerings demonstrate why the Tories are going nowhere on the European Union. The first comes via Autonomous Mind in two tranches, an Open Letter to Roger Helmer and a rebuttal of the great man's comments. The second is a piece from arch Speccytwat James Forsyth in the Mail on Sunday.

Turning to the Roger Helmer effort, this demonstrates, beyond peradventure, that the man really is not a eurosceptic – merely a Tory timeserver, who serves to garner votes in support of a cause that inherently favours European political integration.

Forget not that the Tories took us in to the "Common Market" and, of the two great building blocks of the European Union, the Single Market Act and the Maastricht Treaty, both were negotiated and approved by Tory administrations.

The clue, therefore, to Helmer's false claim (for it is he who would have us believe he is an "outer") is a response to Autonomous Mind and the question: why do some eurosceptics in Westminster occasionally appear to support some integrationist measures?

To that the Great Sage puts his own rhetorical question: "Is it better to seek to move the Conservative Party in a Eurosceptic direction over time (which implies some compromise with Party policy), or to make one grand kamikaze gesture which rules you out of the action ever after ...?".

And there lies the constant and continuous deception. If, after nearly forty years, the Conservative Party has not yet moved in a Eurosceptic direction, then it is a fair bet that it never will. Yet, year after year, decade after decade, the Myrtle tendency wants us to discard the evidence of our own eyes and believe that one day the impossible will happen and the Tories will lead us out of the European Union.

Turning then to the Speccytwat, we then find a variation of the Tory theme, with the young Forsyth pontificating about how – on the basis of yet another inane an expensive EU law – Dave and his merry men need to "tackle Britain's relationship with the EU".

The problem with which we are confronted, therefore, is that the Tory commentators are so incredibly thick that they cannot even get past first base. They survive in a fog of incomprehension, compounded by their own impenetrable stupidity. That ensures that we are not likely to make any more progress in the next forty years than we have in the last.

The moronic Forsyth, however, is determined to stretch incredulity to the limits of elasticity and beyond, advancing the idea that The Boy whom he so much adores should be looking for a new Cabinet Secretary on the retirement of Gus O'Donnell, with a proven ability to cut regulation and reduce red tape.

No one but a moron could utter something quite so stupid – the idea that a Cabinet Secretary can succeed in achieving something that a prime minister and his cabinet, and the entire elected parliament, have failed to do.

Most of all though, it ignores the reality of the European Union – regulation is not an à la carte option. Adoption of the acquis communautaire is an essential and inseparable part of our membership of the European Union. The only way out, is to get out – to leave the EU entirely.

And it is this that these incredibly thick Tories simply cannot deal with. Instead, they prattle and blather - but the only ones to think they are clever are themselves.

With forty years of membership under our belt, you would have thought they might possibly have learned something about the EU ... but it is Tories of which we speak. "Too thick to learn" might be their real party slogan.