We can do without second-rate politicians grandstanding on issues over which they have little control and of which they have less comprehension, spending money we haven't got, while neglecting domestic issues. 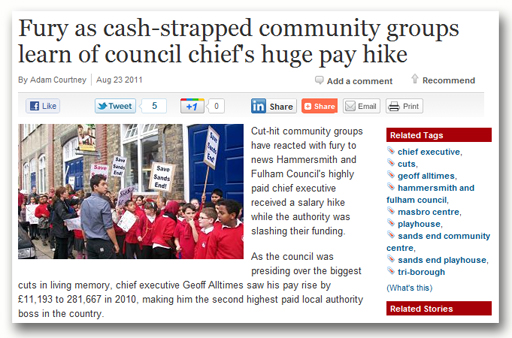 Whether or not the politicals and their gormless claque realise it, we have enough crises over here to be going on with, not least local authority management taking the piss.

The latest example is Hammersmith and Fulham Council's highly paid chief executive. As his council was presiding over the biggest cuts in living memory, Geoff Alltimes saw his pay rise by £11,193 to 281,667 in 2010, making him the second highest paid local authority boss in the country. 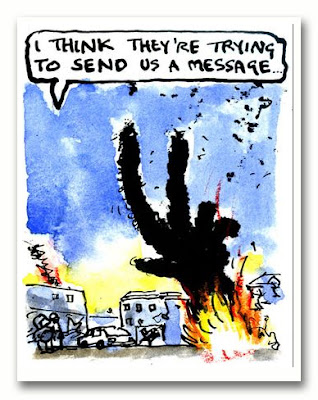 On top of that, we have County councillors in Norfolk rejecting suggestions from communities secretary Eric Pickles that the chief executive's post is a non-job. Pickles is keen on councils saving cash by sharing top officer posts and has previously questioned both the value and substance of the chief executive's role, with the present post-holder David White taking a basic £205,000 a year in salary. But members of the county council's corporate resources overview and scrutiny panel has given the idea the "thumbs down".

Then we have a ghastly situation over in Northern Ireland, where convicted murderer Mary McArdle gets a job as a SPAD on £90K – an insult to the victim's relatives and their community.

There are so many of these sort of episodes that it would be unwise of ministers to ignore them. Whether it is hospital bosses getting away with murder, obscene compensation payments, officials living high on the hog, or just wasting money, people have had enough.

Despite the determination of the politicals not to take the riots and looting as a warning sign, we are not alone in seeing them as a response to organised looting by the parasite class, which is seriously pushing its luck - witness the political cartoon in the Independent.

The Boy maybe today rejoicing in the ransacking of Gaddafi's compound, but if he lets the sores here fester, his compound will be next. It won't then be an Arab Spring he is looking at but a British fall.