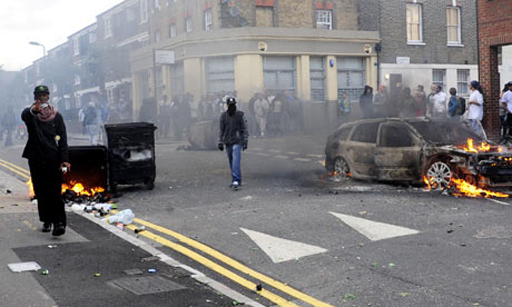 "A social fightback means instilling in our children and young people the decency, discipline and sense of duty that make good citizens", says arch hypocrite, David Cameron, a man trying to convince us that he has a handle on the recent riots and looting.

Another pretender is Tony Blair, who at least has a point when he rails against the "muddled thinking" of those on the Left and the Right. Both, he claims, "miss the point" about the cause of the riots. Neither social deprivation nor a lack of personal responsibility is at the root of the problem. Instead, he says, Britain, like "virtually all" developed nations, needs to deal with a group of people who are beyond the pale.

"The big cause is the group of alienated", he says, "disaffected youth who are outside the social mainstream and who live in a culture at odds with any canons of proper behaviour. And here's where I simply don't agree with much of the commentary. In my experience they are an absolutely specific problem that requires a deeply specific solution".

This polarisation gives the MSM exactly what it wants, as it can now turn the post-mortem analysis into a biff-bam soap opera, a genre it can cope with.

Blair is right in one thing, though, in asserting that the disaffection noted on the streets of Tottenham and elsewhere is an international phenomenon, with the car burning in Berlin continuing. It is causing as much puzzlement and anguish as the unrest over here. And, with a recent outbreak of street violence in Hamburg, we are seeing some awfully familiar TV pictures.

The British plod, though, are charging that some of the violence was orchestrated in Birmingham, with a similar charge in London, where it is alleged that outsiders were bussed in to do the business.

Where that applies, it rather knocks into a cocked hat the theory that we are dealing with "mindless violence" – the preferred meme of the Right. If it was "organised", it could hardly have been mindless. But what escapes both Right and Left is any clear idea of where the causation really lies - another thing Blair has got right.

However, while Cameron prattles about "decency, discipline and sense of duty that make good citizens", he and his predecessors (including Blair) have presided over an epidemic of organised looting which relegates the efforts of the street gangs to the minor league.

Even this weekend, we see Peter Mandelson put in a bid for an £8 million mansion, and no one is even attempting to pretend that this sort of money was gained by honest toil. We also see that more than half of the highest paid council chief executives have enjoyed pay rises as services are cut, despite orders from the government to slash their salaries.

This comes on the back of other examples of organised looting, where council credit cards have been used for spending on £1.5million of items which included furniture and designer jewellery and, yes, plasma screen televisions. Councillors and town hall officials have also spent more than £4 million on luxurious trips around the world.

As examples of "decency, discipline and sense of duty that make good citizens", these positively stink, but no one seems to want to join the dots. Nevertheless, it seems that Cameron might be more right than Blair in defining a cause of the riots as "moral decline". Where The Boy goes wrong is in looking in the wrong place for his decline.

Too easily is attention focused on the street violence and looting, when we should going to the top to find the rot. From the look of it, we are wasting our money by jailing the wrong looters.