Two men were sentenced to four years in jail for inciting disorder through Facebook, even though no one answered their online calls to riot. Jordan Blackshaw, 20, and Perry Sutcliffe-Keenan, 22, both from Cheshire, were handed the longest sentences so far after last week’s riots, despite both being of previous good character.

Blackshaw created an event on the site entitled "Smash Down Northwich Town", while Sutcliffe-Keenan encouraged a riot on the same site. No one apart from the police, who were monitoring the page, turned up at the pre-arranged meeting point outside a McDonalds restaurant. Blackshaw was promptly arrested.

Predictably and, I think rightly, The Guardian is airing concerns about "disproportionate sentencing", something which might reach the ears of Mr Nick Clegg ... who seems to have had a little history himself. 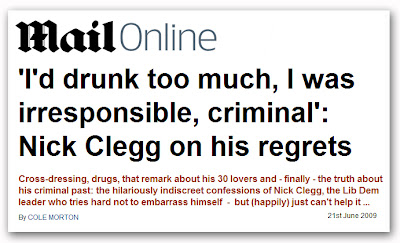 The details are here, with the relevant extract here:


First, though, I want to know if this readiness to please means he'll confess to the unvarnished truth about an episode he once passed off as 'a drunken prank'. My understanding is that it was much more than that.

It was arson, actually. He could have gone to jail, ending his chances of a political career before it had even begun. The property he destroyed, deliberately, was priceless. Can we talk about the cactus?

"Oh, the cactus", he says, placing his head in his hands for a moment, then rubbing his face. "I just behaved very, very badly. I was on an exchange in Germany and I drank far, far, far too much. I was a teenager. I lost it, really".

Lost it? He does seem genuinely agitated. "What I mean is I was drunk..." Yes, he said that. What on? "They had this beer brewed in monasteries near Munich. Kloster Andechs. Unbelievably strong. Which clearly I couldn't take".

Clegg was 16 years old, a public schoolboy abroad. So what happened? "Yeah... I, erm, I was at a party and I drifted into a greenhouse with a friend, saw it was full of cacti and lit a match to find our way, as there were no lights on. The flame accidentally touched one of the cacti, which glowed rather beautifully".

Was it an accident, then? He looks at me. Only at first, it seems. "We did that to a fair number of the cacti. Not really knowing what we'd done".

I can't help but laugh, at the story and the look on his face, but he objects. He treated this like a joke when, cleverly, he made it public at a fringe meeting in 2007, before the leadership election. He doesn't think it's so funny now. "No, it's not... I mean, genuinely. It was the leading collection of cacti in Germany".

The greenhouse belonged to a professor of botany whose life's work had been to gather and nurture exotic specimens from all over the world. 'He'd been to the jungles of Brazil and stuff to find these cacti.'

The boys weren't arrested, because they ran away. "We didn't know what we were doing. We were teenagers, we'd drunk too much - frankly, we did behave appallingly, irresponsibly, criminally. Next morning, one of the organisers of the exchange rang me up and said, 'We know you did this'. I came clean".

The boys were taken off to see the professor, who was livid, but he was somehow persuaded not to press charges. "Instead they created a kind of community punishment for us. Me and the other bloke ended up having to dig communal flower beds in the baking sun.

Then I spent the summer with my mum, going round one specialised garden centre after another, trying to replace some of the cacti. Of course they were tiny, and his were all large".

On the Facebook issue, one does rather get a hint of the smell of fear from The Man, but given Clegg's record - to say nothing of the Bullington boys - one might think that he should display a little "empathy" with the current round of offenders.

But, when it comes to hypocrisy, there is nothing to beat a gobshite Lib-Dim. "Sheer criminality," the "hilariously indiscreet" Mr Clegg intones, as he sees the rioters carted off to jail, for him then to return home in his £300,000 armoured limousine, paid-for by the ever-willing taxpayer.