No confidence in the system 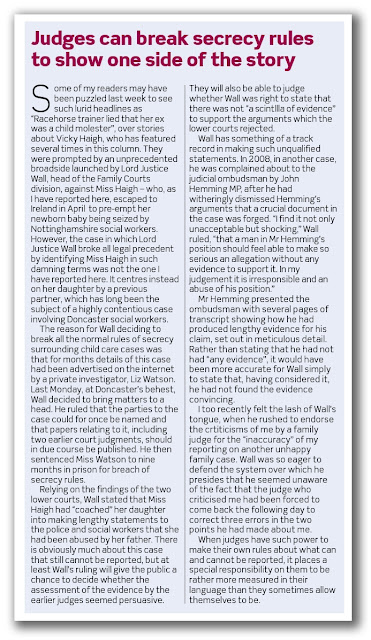 Booker's dogged determination to shine the light of day into the families court system seemed to take a knock last week, when The Mirror and then the Daily Mail (amongst others) pitched into the Vicky Haigh case.

This followed high court judge Sir Nicholas Wall, who had decided to make his judgment on the case public, justifying his breach of the wall of secrecy by citing the "scandalous allegations" put in the public domain "via email and the internet".

In his column today Booker responds, pointing out that the reason for Wall deciding to break all the normal rules of secrecy surrounding child care cases was that for months, details of this case had been advertised on the internet by a private investigator, Liz Watson.

Last Monday, at the behest of Doncaster social services, Wall decided to bring matters to a head. He ruled that the parties to the case could for once be named and that papers relating to it, including two earlier court judgments, should in due course be published. He then sentenced Miss Watson to nine months in prison for breach of secrecy rules.

Relying on the findings of the two lower courts, Wall stated that Miss Haigh had coached her daughter into making lengthy statements to the police and social workers that she had been abused by her father.

There is obviously much about this case that still cannot be reported, but at least Wall's ruling will give the public a chance to decide whether the assessment of the evidence by the earlier judges seemed persuasive.

Crucially here, Wall has dismissed the claims of abuse as lacking "a scintllla of evidence", even though detailed evidence was submitted, including video recordings of interviews carried out by the police, and statements from investigating officers.

Purely on this basis, Wall is demonstrably wrong, but the man has something of a track record in making such unqualified statements. In 2008, in another case, he was complained about to the judicial ombudsman by John Hemming MP, after he had witheringly dismissed Hemming's arguments that a crucial document in the case was forged.

"I find it not only unacceptable but shocking", Wall ruled, "that a man in Mr Hemming's position should feel able to make so serious an allegation without any evidence to support it. In my judgment it is irresponsible and an abuse of his position".

In response, Hemming presented the ombudsman with several pages of transcript showing how he had produced lengthy evidence for his claim, set out in meticulous detail. Rather than stating that he had not had "any evidence", it would have been more accurate for Wall simply to state that, having considered it, he had not found the evidence convincing.

Booker too has felt the lash of Wall's tongue, when he rushed to endorse the criticisms of him by a family judge for the "inaccuracy" of my reporting on another unhappy family case. Wall was so eager to defend the system over which he presides that he seemed unaware of the fact that the judge who had criticised him had been forced to come back the following day to correct three errors in the two points he had made about him.

Booker concludes his piece by writing that, when judges have such power to make their own rules about what can and cannot be reported, it places a special responsibility on them to be rather more measured in their language than they sometimes allow themselves to be.

The point though, is that Wall is defending the system – and is using his power to do so. And the media, going for an easy touch, have fallen in will Wall and taken the free pass to write up a story they have no means of verifying and have not bothered to check. A judge has said it. Whether it is true is neither here nor there – it is reportable and safe.

Hemming has also weighed into this affair, defending his own role, arguing that the adversarial nature of the family courts is inappropriate to deal with the sensitive issues involved. One side wins, the other side loses, he says. Hence if you have an allegation of abuse that is true, but the court has decided it is false then the court makes the wrong decision and potentially places the child with a parent who has maltreated the child.

Expressing his own personal view, Hemming says we need to review the adversarial nature of private family law to have a less adversarial system and one which looks more so for a compromise than a winner takes all outcome.

What is happening currently, though, is that Wall is perpetuating the adversarial nature of the system, and inviting the media to take sides in a complex dispute, where – all of a sudden – the secrecy which normally binds family court hearings has been partially set aside.

And therein is one of the key issues. Wall's disclosures are only partial – and therefore partisan. He is not defending the rights of the children involved, but the system which he represents.

That system, as we have noted, is not one in which we can have any great confidence. Wall has not improved our confidence in it.