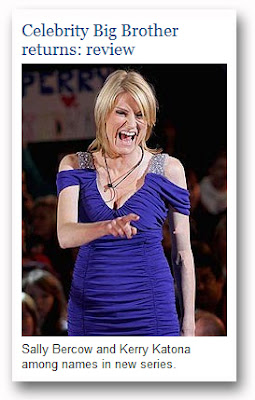 For its latest instalment, the producers of the Kraft durch Freude programme, Celebrity brain-rot, have recruited the Speaker's wife, Sally Bercow (pictured left).

In normal times no man can be held responsible for the conduct of his wife, but in this case we are happy to make an exception. With John Bercow, this pair between them have made a major contribution to the destruction of the majesty and gravitas of parliament, helping to make it the tawdry joke that it has become.

This article says she aims to "stick it to the establishment" during the programme, heedless of the fact that she is part of the establishment, living in a grace and favour apartment which has cost us better than £20,000 for refurbishments, plus another £1390.64, including VAT, for a satellite TV system, to save the pair the trouble of looting the local branch of Dixons.

One has to admit that this pair have got it made – having been able to delegate the parliamentary authorities to do their looting for them – and they certainly deserve each other. The question is whether we deserve such low grade personalities, a question which scarcely needs an answer.