A free pass for Cameron 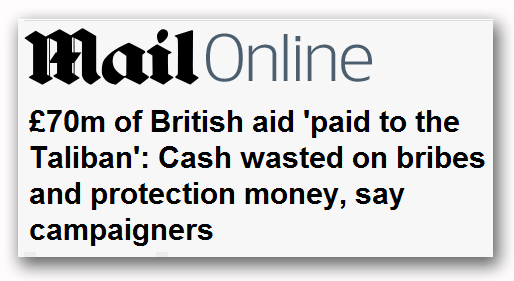 Typically of the Daily Mail, a report from the International Crisis Group, issued on 4 August is given superficial "shock" treatment.

To be fair, at least the Mail covered the report ... none of the other MSM in Britain have looked at it. However, the story is probably based on the Reuters report, issued on the 6th. I doubt whether Mail writer Kirsty Walker has read the whole report – for reasons which will shortly become obvious.

As to the headline issue, this is far from new. Booker did it in his column on 12 September 2009, based partly on my work in the Defence of the Realm blog on 3 September – nearly two years ago.

Then we pointed out that the NATO coalition forces were financing the Taliban's war effort, to the extent that the war could continue indefinitely. Unwittingly, donor country taxpayers were keeping it going. Thus, all this aspect of the report does is confirm that which we averred two years ago. And at this rate, we cannot possibly win.

But the report has much more important things to say about the conflict, which makes one think that Walker had not read it – properly, if at all. It tells us that NATO allies have set a timetable for gradually transferring authority to the Afghan government and plan to hand over full responsibility for security by the end of 2014.

We also get confirmed that transition officially began in July 2011 in several areas, but, for the most part, only in parts of the country where the insurgency has traditionally had but nominal influence. Yet, says the report:


... the Afghan National Army (ANA) and Afghan National Police (ANP), despite receiving more than half of total international aid – about $29 billion between 2002 and 2010 – have thus far proved unable to enforce the law, counter the insurgency or even secure the seven regions identified for full Afghan control by mid-year.

As to the aid programme in general, we are told that the amount of international aid disbursed since 2001 – $57 billion against $90 billion pledged – is a fraction of what has been spent on the war effort. More importantly, it has largely failed to fulfil the international community’s pledges to rebuild Afghanistan.

Poor planning and oversight have affected projects' effectiveness and sustainability, with local authorities lacking the means to keep projects running, layers of subcontractors reducing the amounts that reach the ground and aid delivery further undermined by corruption in Kabul and bribes paid to insurgent groups to ensure security for development projects.

Stark though it is, this is really nothing new ... which is perhaps why the media have given it such little coverage. More to the point, collectively, the MSM have decided to give Cameron a free pass on this issue, for the time being. He has told the hacks that he is pulling out in 2014. In the meantime he has a license to waste our money and send soldiers to their deaths.

That is the way the world works, unfortunately. We have neither the power nor the influence, in the short-term, to stop this obscene waste and destruction. All we can do is point out what happens. And, in the final analysis, it will continue because not enough people care enough to want it to stop.

But never let anybody fool you that we have a free press which is holding the government to account. It is as bad as the politicians who make so free with our money and other peoples' lives.