A mind which had become warped 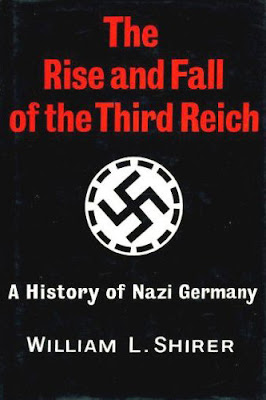 As we review the current news, and do so day-on-day, a remarkable passage in a long-forgotten book reminds us of the perils of exposure to the MSM. The author is William L. Shirer, foreign correspondent for the Chicago Tribune who reported from Berlin between 1926 and 1941, witnessing the rise and peak of the Nazi regime. His book is The Rise and Fall of the Third Reich, first published in 1959, and the relevant passage is this:


I myself was to experience how easily one is taken in by a lying and censored press and radio in a totalitarian state. Though unlike most Germans I had daily access to foreign newspapers, especially those of London, Paris and Zurich, which arrived the day after publication, and though I listened regularly to the BBC and other broadcasts, my job necessitated the spending of many hours a day combing the German press, checking the German radio, conferring with Nazi officials and going to party meetings.

It was surprising and sometimes consternating to find that notwithstanding the opportunities I had to learn the facts and despite one's inherent distrust of what one learned from Nazi sources, a steady diet over the years of falsifications and distortions made a certain impression on one's mind and often misled it. No one who has not lived for years in a totalitarian land can possibly conceive how difficult it is to escape the dread consequences of a regime's calculated and incessant propaganda.

No one would begin to argue that this country is in any way a totalitarian state (yet), but it is indubitably the case that the government delivers a stream of "calculated and incessant propaganda".

However, more so does this apply to the BBC and to the MSM in general. All have their own "agendas" (i.e., propaganda), and all are selective in what they say and do not say. That is not so much censorship as self-censorship, which amounts to the same thing. Thus, in the same way that Shirer found himself affected by Nazi propaganda, contemporary readers will find it almost impossible not to be affected by today's less obvious propaganda in our own media.

And nor, it would seem, are intelligence and education protective factors. "Often in a German house or office or sometimes in a casual conversation with a stranger in a restaurant, a beer hall, a café", wrote Shirer, "I would meet with the most outlandish assertions from seemingly educated and intelligent persons".

"It was obvious", Shirer observed, "that they were parroting some piece of nonsense they had heard on the radio or read in the newspapers". He continues:


Sometimes one was tempted to say as much, but on such occasions one was met with such a stare of incredulity, such a shock of silence, as if one had blasphemed the Almighty, that one realized how useless it was even to try to make contact with a mind which had become warped and for whom the facts of life had become what Hitler and Goebbels, with all their cynical disregard for truth, said they were.

The phrase which leaps out of the page here is: "a mind which had become warped". There cannot be one of us who has not met this phenomenon, and realised the same futility of trying to argue with a warped mind.

You do not need a totalitarian state for this to happen, and it is most prevalent in the closed societies such as Westminster, where we see it in the "bubble" effect. It is also very difficult for us to avoid the taint, which is why I have taken a conscious decision not to watch BBC TV routinely or listen to the BBC news on the radio. Such value as is imparted by the information they give is negated by the propaganda.

The tragedy is that a mind once warped is not easily re-programmed to accept or understand the truth. It took a world war and a humiliating defeat to break the spell on the Germans – and some never really recovered. We have the same problem, which we cannot remedy by the force of arms. But, if it cannot easily be defeated, at least we can recognise the phenomenon for what it is.