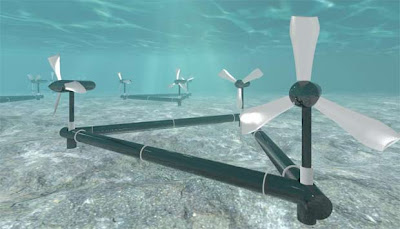 Barely noticeable amid the daily torrent of "news" flooding onto the internet – some of it important, much not – is a small item announcing: "Tidal Energy's project to install Wales' first full-scale tidal stream generator has secured a £390,000 grant from the Carbon Trust".

Even though that money is coming out of our pockets, it is hardly anything to get excited about – as much could easily be chewed up getting rid of one over-priced local authority chief executive.

But what grabs the attention is then the remark that this "investment" follows £6.4 million from the EU and £4.4 million from shareholder Eco2 as well as others. And all this, more than £11 million of which seven is public money, is to build one "DeltaStream" tidal generator with a capacity of 1.2 MW (and a likely load factor of 27 percent).

Panning out at about £9 million per MW, that makes this particular installation about three times more expensive than offshore wind – although the prices are not directly comparable as this is a test rig.

Given that the 12-month technical trials are successful, it is proposed that a larger-scale "pre-commercial" array will be installed, with a target date for operation around 2014. And by then, the project will have soaked up about £70 million.

Based on all previous assessments, however, it is extremely unlikely that tidal power will ever prove financially attractive – although this has not stopped our idiot government pumping £20 million into the wave and tidal energy "industry", and even then the rent-seekers are complaining that it is not enough.

For that money, we could have made redundant over 100 over-priced local authority chief executives, which indicates the scale of the waste we are having to support – and that is not including the EU money. Lacking any democratic legitimacy, this is nothing short of theft, and in its very own category ... grand theft tidal, as the Americans might say.