Other pieces of the jigsaw 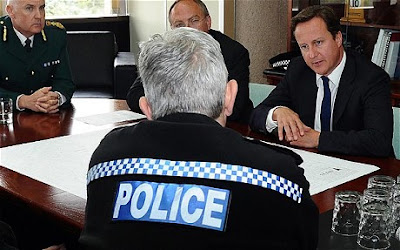 It is not only that the police are inadequate but that the supporting "justice" system has also fallen apart. Peter Hitchens takes a look at it, arguing that, "It is not prison that is an expensive way of making bad people worse. It is this joke justice, defeatist and defeated, which ensures that almost nobody arrives in prison until he already has a higher degree in crime".

On the general issue of the riots, Hitchens then takes the high moral ground, writing in a separate piece:


Bitter laughter is my main response to the events of the past week. You are surprised by what has happened? Why? I have been saying for years that it was coming, and why it was coming, and what could be done to stop it. I have said it in books, in articles, over lunch and dinner tables with politicians whose lips curled with lofty contempt.

The mass criminality in the big cities, he says, is merely a speeded-up and concentrated version of life on most large estates – fear, intimidation, cruelty, injustice, savagery towards the vulnerable and the different, a cold sneer turned towards any plea for pity, the awful realisation that when you call for help from the authorities, none will come.

We, of course, have also been predicting trouble for years – with exactly the same response from politicians, so much so I cannot be bothered to talk to them any more. They are a waste of time and space. That leaves us the blog … not as great or as grand as Hitchens's rag, but it is at least a platform.

That is just as well, for – much as I admire him - I don't think that Hitchens has completely got it. It is not only that the authorities give us no help when it is needed but also that they have become our enemy … no help at all when my house is burgled, but turn up mob-handed to arrest me and put me in prison when I refuse to pay for the service I am not given.

However, Hitchens is spot on about Cameron, observing that he is "once again defrauding far too many people. He uses his expensive voice, his expensive clothes, his well-learned tone of public-school command, to give the impression of being an effective and decisive person. But it is all false. He has no real idea of what to do".

That really does make The Boy's posturing about a "zero-tolerance approach to street crime" all the more fatuous and dishonest. Without acknowledging the already serious flaws in the way that the police operate, the result will only be to give license for still more of the same inadequate policing that we have all experienced. Does the fool really think that a police force that misuses its existing powers is not going to misuse additional powers?

And what a contrast we see between Hitchens and the fawning sycophant Tim Montgomerie, who is fast developing a second career as a media tart. "Mr Cameron has been handed a chance to mend this broken society … The Tories have strong ideas about social justice; the time is ripe to put them into practice", he bleats.

The vomitus-inducing prose delivered is not something to which I would wish to expose my readers, but is useful in illustrating the woolly-minded, feminisation of the Tory Party. That is another piece of the jigsaw. Unfashionable as he is, Booker is dead right. It is about manliness. The ruling classes have lost their balls.

COMMENT: EVEN NEWER RIOTS THREAD
Posted by Richard at 14:10