And the fool speaks The trouble is, Mr Cameron, you don't represent us either. We don't share your values, we don't trust you, didn't vote for you, and do not accept from you what you think is "leadership". We have no confidence that you have any grasp of the issues, or can even begin to solve the problem.

Reheating the same tired old scams isn't going to work either, Mr Cameron. You tried that on us in September 2007, so offering a variation of the same thing now does not impress.

A "National Citizen Service" would help mend Britain's "broken society", you said in 2007. You said that you wanted the programme to bring together "north and south, black and white, rich and poor". It would help young people "develop a sense of purpose, optimism and belonging which would reduce their desire to binge drink, carry weapons and take drugs", you said.

Hundreds of thousands of 16-year-olds would be encouraged to spend the summer on "a six-week course to encourage patriotism and civic responsibility", you said. 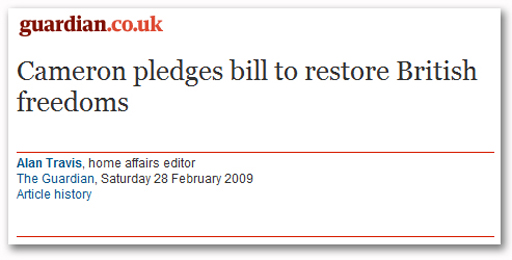 We could, of course, tell you what is wrong and how to fix it - and have done. But you and your kind don't listen - never have listened. You are only really interested in maintaining your own power and privilege, and want people to tell you only what you want to hear, on your terms. To that effect you have developed sophisticated filters which enable you to hear only what you want to hear.

COMMENT: EVEN NEWER RIOTS THREAD
Posted by Richard at 12:04