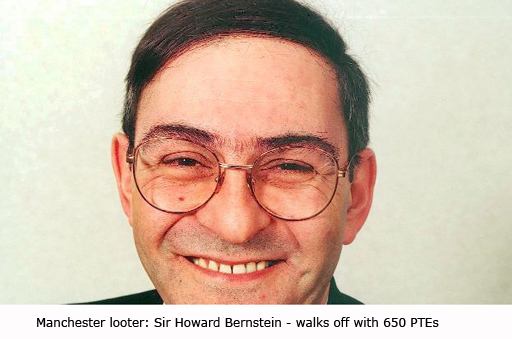 Despite forcing citizens, under threat of violence and imprisonment, to pay for translating a guide to pigeon-feeding into Urdu – just one of the documents which contributed to a bill of thousands for translation services last year – looter Sir Howard Bernstein is to keep his job as chief executive of Greater Manchester Council.

Bernstein, who is ripping off council taxpayers to the tune of £230,00 a year plus perks – 650 wide-screen plasma TV equivalents (PTEs) – is in the top regional league for pocketing taxpayers' dosh.

Amongst his other crimes, he has overseen the payment of £2,000 to sixteen no-hopers, for them to try stand-up comedy, "in order to help them develop their confidence and make friends". He has also pumped £120,000 into B of the Bang, Britain's tallest public sculpture, later nicknamed "Kerplunk" after its giant metal spikes began falling off.

Not content with this, he has also spent £8,000 on a sex guide for the over-50s, featuring advice including watching a "sexy movie", sending out around 5,000 copies of this "extraordinary and misguided pamphlet". And, to add to this round of piss-taking, he allowed his staff to advertise three communications posts on salaries of up to £39,000 in October despite a recruitment freeze.

Yet this stain on the fabric of British society not only gets to keep his job but also presides over "swingeing cuts" in useful public services. He is to close all but one of the council's public toilets, five libraries, three leisure centres and two swimming pools. He will then force motorists to pay parking charges on Sundays and halve rubbish collections. Some 2,000 town hall jobs will go, and he will end funding to all youth centres and Sure Start nurseries.

When it comes to personal looting, however, "givvus-a-job" Bernstein is by no means top of the league. His counterpart Colin Hilton, chief looter of Liverpool, rips off £279,000 a year from unwilling council tax payers (800 wide-screen plasma TVs), the head of Lancashire County Council, Ged Fitzgerald, steals £254,000 (725 TVs) and Cumbria council boss Peter Stybelski walked off with £464,000 last year (1,325 TVs) - three-quarters of that in back-dated pension appropriations.

All of this has been achieved from the comfort of council-furnished offices, with not one of them having to soil their manicured fingers or duff up recalcitrant council tax payers. They have a staff of serfs to do that for them, and keep their cheques flowing. Only honest looters have to smash windows to get their TVs.