First, it was this: Hospital bosses have outlined new approaches they said are needed in the face of "enormous" and growing financial pressure. The trust had slipped almost £7million behind on the year's £27.5million savings target.

Hospital chiefs said the already-huge target needed to be increased to £40million to tackle rising costs, balance the books and prepare for future savings.

Then it was this: Paul Roberts, chief executive (salary £170,001 - 175,000) said: "There is no doubt that it will be a tough year. "For the first time in a decade the Trust will receive less money in 2011/12 than it has in the previous year. "But whilst we will have to make very significant savings this year, our priority remains to provide safe and effective care to our patients."

The salaries of senior managers, incidentally, run to £1.46 million - with pensions on top, of course. 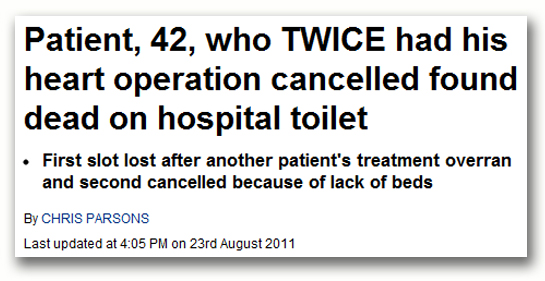 But then this happened: Richard Thompson, 42, was due to undergo the operation at Derriford Hospital, Plymouth, but was delayed because a previous patient's treatment overran. Six days after Mr Thompson's surgery slot was cancelled for a second time due to lack of beds, he was found dead in a ward toilet after suffering a fatal heart arrhythmia. 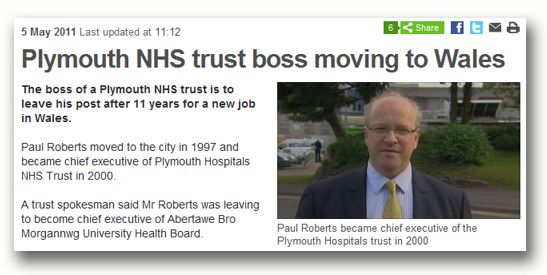 But never mind. Paul Roberts is alright. He was already in the process of leaving for pastures greener. ABM Health Board chairman Win Griffiths, said: "I am confident Paul will provide strong leadership to our executive team and all our staff as we face the challenges of providing better healthcare and improving the health of the people we serve".

So every story has a happy ending. It's a pity about Mr Thompson, but there you go.