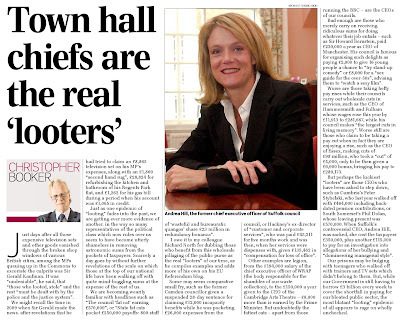 Booker has done me proud in his column, putting the "real looters" on the map. Our prisons may be bulging with teenagers who walked off with trainers and TV sets which didn't belong to them, he writes.

But, while our Government is still having to borrow £3 billion every week to cover the shortfall in paying for our bloated public sector, the most blatant "looting" epidemic of all appears to rage on wholly unchecked.

The comments on the column seem largely supportive, but some – as always – miss the point. When it comes to local authority CEOs, these are paid out of council tax. And unlike even central government taxation, if you refuse to pay, you go to jail.