We may be too late 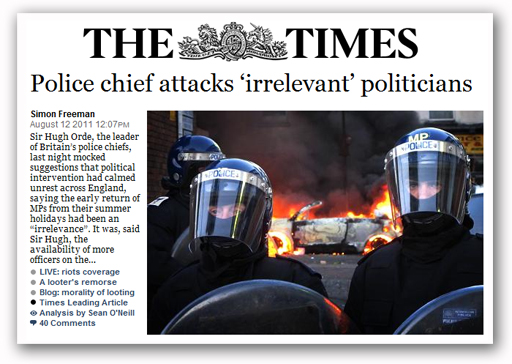 As the politicians squabble with the police, following these riots and the aftermath has been something of an education. The riots themselves brought out the very best and the worst in some people, and, as far as the commentariat goes, the issues arising sort the sheep from the goats.

As regards the people though, if the Guardian is to be believed, we have echoes of the servility and wimpishness of which Miniter and Coulter complained. A poll conducted for the newspaper has 30 percent saying that Cameron has done a good job, against 44 percent who say the opposite, a net negative score of fourteen. For Boris Johnson, the figures are 28 percent good job and 38 percent bad, a negative of ten points. 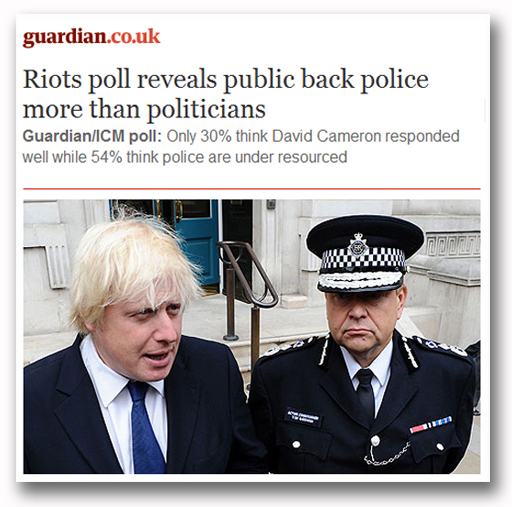 By contrast – and here the wimps come out to play – 45 percent think that the acting commissioner of the Met-Plod, Tim Godwin, has done well against 27 percent who say the opposite – a positive score of 18.

In and amongst the commentariat, Charles Moore has his own nostrum. And, while Moore can be a perceptive and intelligent analyst, this time he disappoints.

In another woolly piece, he supports as "vital" the idea of having elected police commissioners to oversee the police, with what Cameron calls the "thoroughly good" result that they will become accountable to the public. He then also wants an investigation "into how our laws and practices have come to prevent the police doing the job almost all of us want them to do".

These changes, says Moore, could start to reverse the trend of 30 years and recover our streets for civilisation. But there is no recognition of the broader issues, and no understanding at all of how far we, the people, have ceded our power and responsibilities. In his heart of hearts, Moore is just another statist.

Hannan is another of the commentariat in full flow. I've never liked the man, but have always thought he was fairly bright. But too many years living high off the hog has dulled his edge, and he is now distinctly second-rate. His person nostrum is elected sheriffs, another of those lightweight ideas that is superficially attractive, but actually meaningless.

A lot of people make the mistake of thinking that electing officials somehow – and necessarily – improves governance. One would have thought the experience of having a London mayor would have disabused people of that, but learning difficulties here seem to be the order of the day.

The idea, of course, is that elections confer a degree of accountability, allowing voters to dispense with an official who does not deliver the goods. In London, though, the choice is between Ken Livingstone and not Ken Livingstone, which means that the idiot Boris gets the job.

In other instances, an electoral system delivers people who are good at getting elected, rather than the right people for the job. And the idea that anyone has ever lost office merely on the basis of their performance, should long have been abandoned. Surely the experience with Blair should tell people that.

Anyone with half a brain-cell could tell you that the system is wrong – which is why most politicians haven't detected it. Anyone who has experienced the system knows that it's wrong. It is a closed loop. And the plods know it as well – they know that they can get away with being rude, arrogant, and stupid. The complaints system won't touch them.

An effective complaints system would actually confer a high degree of accountability – which is why, presumably, there is no attempt to mend the system. Instead, we get faux accountability through elections, which add another layer of expensive professional politicians, and confuse still further the chain of responsibility. 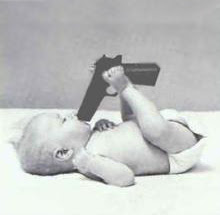 The trouble is that people like Hannan – and, of course Cameron – have a following. That does not mean they are right. It actually means many people tend to be sheep. These are the ones that fawn over men in uniforms, who actually respect politicians – whatever they may say – and believe what they read in the newspapers and watch on television.

These infantile people are the real problem. Giving them freedom and the responsibility to make decisions is like giving a baby a loaded gun. However, they, unlike the politicians, are capable of growing up. But the grown-up debate is happening largely outside the cloying myopia of the failing MSM, and not enough people are joining in as yet.

I am confident that this will eventually happen, as generally I do believe in the "wisdom of the crowd" – it can happen both ways. But it must happen faster if these riots are to be a beneficial turning point. It can go one of two ways, towards a more authoritarian, statist society, or along the path to freedom. At the moment, the media and the politicians are driving it in the wrong direction. We may be too late to change it.

COMMENT: NEW THEIR RIOTS THREAD
Posted by Richard at 00:02