Not the end, but a rehearsal 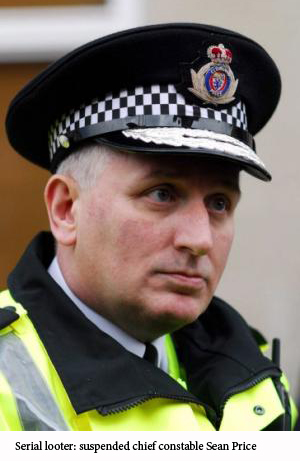 While the media is being saturated with tales of the "exemplary" sentences handed down to last week's rioters (were the disturbances really only last week?), very little is being heard about the serial looters in Cleveland, the most salient fact to emerge being that the investigation there is costing £100,000 a month.

We write here, of course, about the scandal of chief constable Sean Price and his deputy, Derek Bonnard, who were arrested this month on suspicion of misconduct in a public office, fraud by abuse of position and corrupt practice. The force's former head of legal services, Caroline Llewellyn, is also implicated.

No doubt the powers that be are extremely relieved that the more overt spate of public looting has driven this episode from the front pages – and the London-centric media was never going to give it much space anyway.

Nevertheless, it is beginning to emerge that Price and his fellow conspirators have been engaged in long-term theft and corruption on a scale that is quite staggering – with a very significant number of people involved.

As to the amateur looters currently going through the courts, considerable concern continues to be expressed about the level of sentencing, leading to a closing of the ranks of the brain dead, with the Big Brave Cameron "talking tough" from behind concrete barricades and the protection of his armed guards.

What is particularly disturbing though is not only the level of sentencing, which is clearly disproportionate in some cases, but what is also the makings of racial bias.

Thus, while white man Nicolas Robinson is jailed by district judge Alan Baldwin for six months for the "opportunist theft" of a £3.50 bottle of water, Ghanaian Ohene Bamfo, charged with robbery, theft and violent disorder, is freed by district judge Tanweer Ikram on the basis that he has already been detained for two days in custody.

Of course, two swallows do not a summer make, but it has to be said that, on occasions like these, the magistrates court system almost invariably gets it wrong – witness the tiny example of Leigton-Morris, which is far more typical than one might imagine.

The issue cries out for inspired political leadership, instead of which we get Cameron. A sensible leader might have recognised that last week's rioting was the "madness of the moment", with underlying tensions and causes, from which responsibility the political classes cannot entirely divorce themselves. A clever response might have been a conditional amnesty – conditional on the loot being returned in a reasonable period – while the great and the good properly investigated the causes.

Lacking such a deft touch, the political classes are going out of their way to leave a legacy of bitterness and a residual feeling of unfairness, while the message sent is one of fear. The knee-jerk reaction speaks of little else.

But the most powerful message of all is that, if you wish to indulge in large-scale looting, wear a uniform with silver braid on your hat. Then, even if you are caught, you will be suspended on full pay while every process of the law is exploited. Not for you will be throw-away summary "justice" and nor, one suspects, will any sentence approach that of the Facebook duo.

And by such means – as we observed earlier – instead of putting the lid on events, the political classes seem intent on turning last week's riots into a rehearsal.