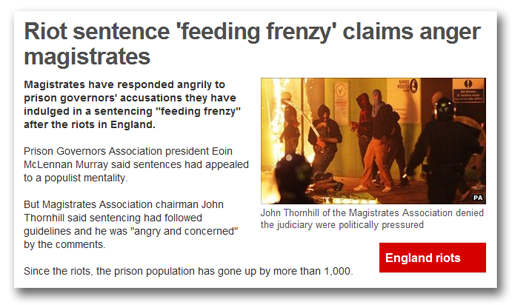 Given the overwhelming evidence that sentencing has been far more severe than normal following the recent rioting and looting, one might expect the accusations of Eoin McLennan-Murray, president of the Prison Governors Association (PGA), to be taken seriously.

He has charged that the courts have shown "naked popularism" in meting out tough justice after the riots, and is warning that, if people continue to be put behind bars at the current rate, prisons will be full by mid-September.

"It's like when you've got sharks and there's blood in the water and it's a feeding frenzy. There's a sentencing frenzy and we seem to have lost all sight of proportionality," McLennan-Murray said yesterday. "It's appealing to the populist mentality, and that's not the best basis on which to sentence people. The norms of sentencing are being ignored."

However, any expectation that the courts might have reacted in a measured way goes right out of the window. In a classic bureaucratic response, the Magistrates have "angrily" dismissed the criticisms. But Magistrates Association chairman John Thornhill said sentencing had followed guidelines and he was "angry and concerned" by the comments.

The point, of course, is that the evidence is unarguable. Since the riots, the prison population has gone up by more than 1,000. It reached a record high for the third consecutive week last Friday, standing just 1,500 short of its operational capacity at nearly 87,000.

Thus, you can argue that the "feeding frenzy" is merited, and that the language is overblown. But you can't, with any logic, claim it isn't happening and pretend that normal procedures are being followed.

But that is the bureaucrat mentality for you – a complete inability to accept criticism, or to respond to it with anything other than denial. And the terrifying thing is that these are people with real power. We are heading for troubled times.