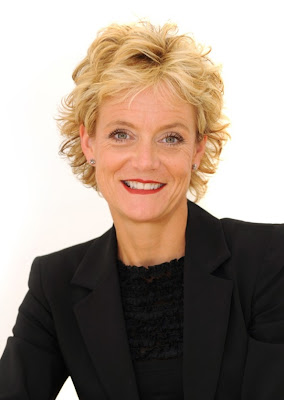 Suffolk Council Tax payers have been shocked to discover that, after ridding themselves of the High Thief and chief executive Andrea Hill (pictured), they are to be lumbered with another looter, who will walk away with at least £160,000 of their money.

Styled as taking "significantly less" than the peculatory Hill – who was annually pocketing £218,000 - the new chief executive will still take a bonus on top of its guaranteed loot "if annual targets are met". Further, the top of the salary band is £225,390, so the new entrant could soon be ripping off as much as Hill, if not more.

Yet this largesse at taxpayers' expense is based on a report by "head of strategic HR" Sally Marlow. This thing says that changes to the salary scale are needed "because of financial pressures on the council, value for money considerations and regular comparisons between the pay levels for chief executives of local authorities and that of the Prime Minister".

Meanwhile, an interim post holder, acting as chief executive, will be expected to make "significant progress" in achieving £50 million in "savings" in the next two years, overhauling services and cutting overhead costs – presumably so that he and his gang of looters can continue ripping off the public purse to line their own pockets.

North Jr thus writes in his own inimitable fashion that, "If I were stupid enough to fall for the democratic decoy of e-petitions I would start one along the lines of stopping 'benefits' for council executives". He adds: "Since I no longer have any faith in this 'democracy' of ours, I will simply record their names for the day when order really does collapse. Then I might just treat myself to a wetsuit and an assault rifle".

There have to be reasons why we do not rise up and murder these scum. One has to be that the veneer of civilisation still restrains us. But they are stretching the boundaries of our tolerance. They should be aware, though, that - like our money - tolerance is not inexhaustible.