Picking up the wreckage 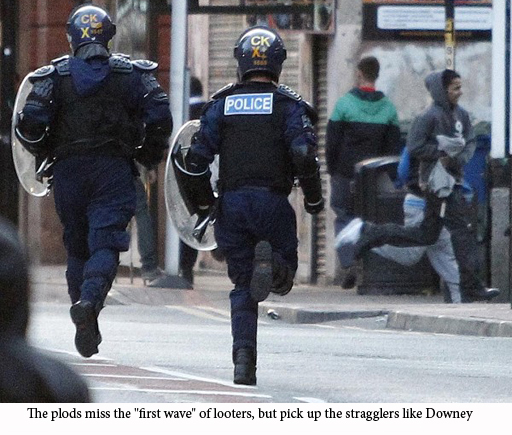 For all the bellicose talk of dealing with the rioters and looters, here is an example of the "justice" system at work. Alcoholic Thomas Downey, 48, who was caught helping himself to doughnuts from a Krispy Kreme shop, was jailed for 16 months today. Hapless Downey, of no fixed address, had only been released from Strangeways prison at 7.30pm on Tuesday when he found himself in the midst of the rioting.

Downey admitted burglary and breach of an Asbo by entering part of Manchester City Centre from which he is prohibited. The judge told him: "You are an alcoholic. That is established by your record which shows a chronic condition. You drink too much, too regularly and when in drink become threatening and abusive".

"Indeed on the evening before your arrest you had been released from prison and seem to have got no further than Piccadilly", said the judge. "The shop keeper described your condition in blunt terms, 'he was pissed'".

Although he wasn't involved in the rioting, he saw the Krispy Kreme store unsecured and helped himself because he was hungry, having spent all his money on tobacco. She said: "He can't recall the events because he was drunk but he has expressed remorse."

One does not have to be a bleeding heart liberal here to see that jail is not the answer to the Downey problem – not least because it is an expensive and ineffective measure in this case. Likely, the best option would have been a secure rehabilitation centre, except that there are rarely enough places, and that part of the system is under-funded.

In any society, though, there are always inadequates. That is a fact of life, and a humane – to say nothing of sensible – society deals with it. Using the prison system as a human garbage dump, on the other hand, is not really an answer. It perpetuates the problem and costs us more in the long run.

Strangely, there is a system where inadequates like Downey could be pulled in to supervised employment, enabling them to make something of their lives. It is called Remploy. Yet its workshops are being closed down and the system is being dismantled, something initiated by Labour and not reversed by the caring, sharing Boy.

What is happening though, is that the plods, storming into the riot areas, have been missing the "first wave" of rioters and looters, and picking up the inadequates like Downey, with the "justice" system then putting them in jail - exactly the opposite of what we need to be doing.

But then, as one learns, it is much easier to bray about "being tough", and to call for more prisons to be built – and filled. Why bother trying to solve a problem when, with a little bit of effort, you can make it considerably worse?