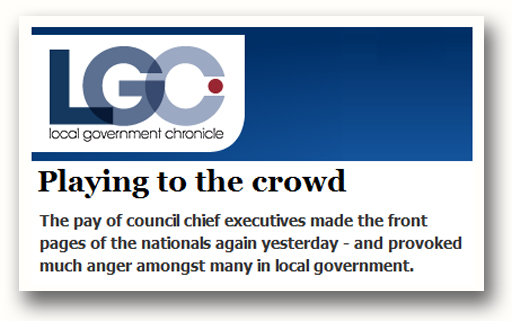 Confronted with evidence of their peculation, you would think that local authority chief executives would be hanging their heads in shame. That, though, would be to misunderstand the beast. Lining your pockets with public funds means never having to say you're sorry. Thus, we get "much anger amongst many in local government" at the inclusion of "all payments to chief executives covering items such as expenses, pension payments and returning officer fees".

In particular, the officials are very cross about this story, identifying one of their number, Phil Dolan, as a council fat cat, "earning" £570,000. We've got him all wrong, it seems. When he left his lucrative post, his authority, South Somerset, was "obliged" to pay Mr Dolan his £133,878 salary and £6,000 benefits in kind for the year, £23,122 for his notice period, £239,000 to the Local Government Pension Scheme under rules set by DCLG and £10,700 in statutory redundancy compensation. The only part decided by the council was a £156,676 discretionary redundancy payment.

Therefore, ministers – to say nothing of the rest of us – are making "malicious and vindictive" personal attacks on these innocent local government officials. And as people lap these stories up, we are told, "they come to view local government officers as 'fat cat bureaucrats' intent on bleeding the state dry for their own advantage when, really, they'd be far better off if they left the sector".

Well, there is a real easy answer to that. If these poor, misunderstood little darlinks think they would be better off elsewhere ... please leave the sector. We won't mind at all.