A spate of car burning in Berlin – now the fourth consecutive night – has left the authorities puzzled and alarmed, with the familiar rhetoric appearing.

As the number reached 47 after the third night, with another twelve overnight, German politicians are urging "tough action". In the absence of any obvious political motivation, the police are dismissing this as simple "criminality" – thus putting them on a par with the British plods, who were quick to categorise the English rioting and looting in similar terms.

In a seemingly unrelated phenomenon, Michelle Malkin in the United Sates is reporting on the appearance of "flash mobs" – mainly black youths, who gather quickly in an area to loot shops and cause mayhem, then dispersing before the police can respond.

In common with the Berlin "carbecues" – and the English riots – this too seems to be apolitical violence, although the authorities seem to be rather too quick to attribute this to straightforward criminality. There is a pattern here.

What may well be happening is precisely the phenomenon which we noted in our earlier piece. Far from being "mindless" or random violence, the driving force seems to be entirely rational. Simply put, it pisses off The Man.

In the context of almost complete breakdown of public morality, with our ruling classes across the continents devoting themselves to personal enrichment, looting the public purses, the feeling of disempowerment and frustration has reach almost fever levels. Such apparently random acts of violence, therefore, seem entirely logical if viewed as the "underclass" giving vent to that frustration.

This, in fact, was how I always imagined we would see the end – not in some great apocalypse, or war between nations, but as random violence, spreading in intensity into widespread anarchy akin to a low-grade civil war, with whole areas where the writ of the central authorities no longer run.

The tactics in each case seem to follow the basics of guerrilla warfare, adopting the "hit and run" tactics, rather than overt confrontation – leaving the traditional, slow moving riot-control forces floundering.

As long as the authorities insist on seeing that as "criminality", though, and rely on talking tough, with "crack downs" and exemplary sentences, they are losing the plot. The whole idea of this violence is to provoke a reaction and, preferably, an over-reaction. The authorities thrashing around, flinging out increasingly draconian sentences on an industrial scale, is not thus seen as a sign of strength, but of weakness. They are seen as running scared. 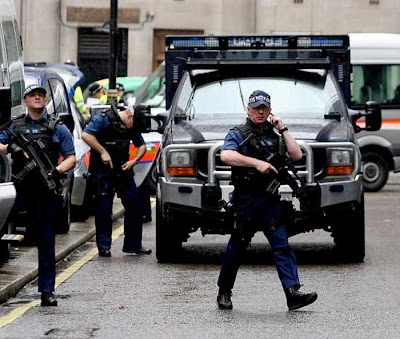 Further, the diffuse nature of this violence is not something which can be dealt with by conventional policing. The inability of the authorities to understand what is going on, and their failure to deal with it, will thus lead to increasing frustration on their part, and greater chances of over-reaction - with machine-gun toting police on our streets an increasingly common sight.

Yet the two things that could make the difference – clamping down on "ruling class looting" and empowering ordinary people, to take a greater part in their own policing – are something the authorities cannot or will not do. Not only is corruption endemic within the system, the ruling classes no long trust the people – if they ever did.

Misreading the situation, therefore, they are set to make the situation worse – as they are doing in Britain, provoking the very violence they are seeking to avoid. Add an economic collapse to this heady mix, plus widespread power outages, and the low-grade civil war will become a reality.