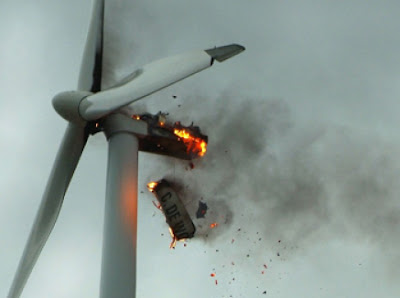 Wind turbine accidents involving injuries and equipment damage have surged over the last decade, peaking in 2008 with 128 incidents worldwide, according to the Caithness Windfarm Information Forum, via the Los Angeles Times. Since the 1970s, there have been 78 fatalities, with about half in the U.S.

The number of solar incidents is harder to gauge, but most industry workers say it's rising. Solar workers perform tasks similar to those in the most dangerous professions: roofing, electrical work and carpentry.

In April 2010, Hans Petersen was taking a break from graduate theology studies and had been installing solar panels for six months when he stumbled off the sloped roof a Northern California public housing complex and plunged 45 feet to his death.

Even the public can be at risk, watchdog groups say. Fires atop wind towers have scattered burning debris, according to neighbours, who also describe hastily built wind installations collapsing within months and harsh weather conditions exacerbating wear and tear.

The complicated wiring under solar panels have left some fire fighters so bewildered that they have allowed residential rooftops to burn. Some panels contain materials such as cadmium and selenium, which could be explosive or even carcinogenic, according to the Silicon Valley Toxics Coalition.

But hey! All this is green energy, so it's good for the environment. These are green martyrs who have died for the cause. Every good religion needs them, and we should be proud to have had so many prepared to make the noble sacrifice.

Next, I think, we invite the greenies to line up on the top of burning windmills and hurl themselves off. Greater love hath no man ... and all that.