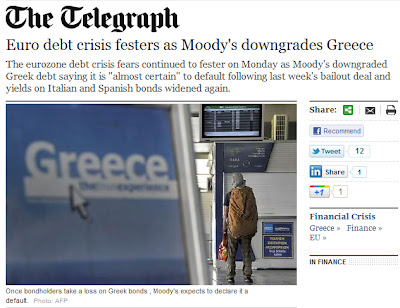 It looks very much as if the latest squirming by the "colleagues" isn't even going to get them past the holiday period. The deal is already beginning to unravel. Ambrose is in fine form as well.

To be honest, though, there really isn't a lot more to say on this issue. It is just a matter of waiting for the crash and, to some extent the details don't matter. But we can take issue with Ambrose, when he says "Europe's ideologues took the whole world to the brink of disaster" as if this is in the past. We are teetering on the brink at the moment, and the "colleagues" are going to tip over, and attempt to drag us all down.

There is a sort of inane piece here as well – stirring stuff, but not getting to grips with the issues. The choice is between a rock and a hard place, but the "colleagues" are determined to stay put – not for economic but political reasons.

Thus, Ambrose tells us that the root problem is that vastly disparate nations with different growth rates, productivity patterns, debt structures, sensitivity to interest rates, legal systems, wage bargaining practices, and inflation proclivities, were meshed together by Hegelian politicians acting against the warnings of the Bundesbank and the European Commission's economists.

But that isn't it at all. The real root problem is that economic means are being used to attain political ends ... ever closer union, all on the basis that this is the only thing that stands between the nations of Europe and war. The "colleagues" are not going to let go of that. They have too much invested in it and, no matter how bad it gets, they will tell you that the alternative is worse. They will persevere, no matter what damage is caused.

But, as I've written before, you can't defy gravity. The wax is melting and soon the body will plummet to earth. These people took off without parachutes. They are not repeat sky-divers.