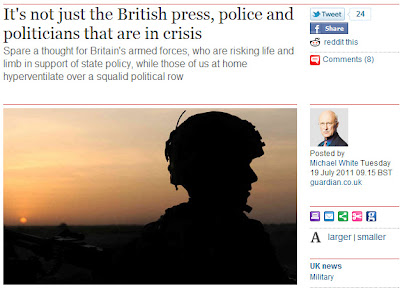 It's not just the British press, police and politicians that are in crisis, writes Michael White for The Guardian. "Spare a thought for Britain's armed forces, who are risking life and limb in support of state policy, while those of us at home hyperventilate over a squalid political row".

My immediate response to this is "speak for yourself, mate". We did a lot more than spare a thought over the weekend and we – unlike the scumset and associated turd-eaters - are by no means hyperventilating over a media storm.

This, though, is a Guardian journalist with a narrative to sell, a man who, from the depths of the most profound and disturbing ignorance, tells us that, while most weekend attention was focused on the Murdochs, the police and the politicians, the Commons defence select committee issued "a powerful condemnation" of the way the mission to Helmand was handled from day one.

Mr White is, of course, far too grand to read independent blogs but, if he had, he might have seen the alternative view expressed. From that he would have learned that, far from offering "a powerful condemnation", the select committee's analysis was weak and its conclusions tepid.

The clue to the direction of the narrative, though, is White's views on the select committee report. The interesting thing is, he says, "that its ire is not directed against the late Labour government or the then-defence secretary, John Reid".

Instead, he writes, "it is focussed on the top military brass who underestimated the threat from the ever-resourceful Taliban ("you have the watches, but we have the time") and told Reid there were enough helicopters to provide air support when there were not. Ministers were not told the risk level, which later proved fatal to so many young lives".

Now here comes the rub. White describes the committee chairman, Tory ex-defence minister James Arbuthnot, as "soft-spoken but solid". But what he does not say is that he was one of the "good ol' boys", part of the Tory defence claque, who actually maintained the myth – right through the critical period – of ministerial responsibility. It was all Brown's fault, remember?

I recall of the period, from 2006, when I watched every defence debate online, and then read the transcripts. I knew most of the personalities involved, and could read the mood music. Defence then was a political football, the mantras of "over-stretch" and "underfunding" being chanted with semi-religious fervour. The Generals were lauded and praised. Dannatt was treated as a demi-god.

Anyone who had half a brain and a little inside knowledge could work it out. I had a lot of inside knowledge ... through parliamentary and other contacts. Furthermore, I was writing consistently on this theme, culminating in October 2009 when I wrote a piece headed, "The generals must share the blame", celebrating the fact that, at last, the Spectator had published a half-decent piece.

This was by Paul Robinson, professor in the Graduate School of International Affairs at the University of Ottawa, whence I noted that, after years of ploughing the solitary furrow, pointing out that the military should bear some of the blame for the (then) current parlous state of our Armed Forces, and their lacklustre performance in first Iraq and now Afghanistan, only now did the magazine pop up saying the same thing.

In my own piece, I had referred to a particularly trenchant piece of my own in April 2009, where I wrote of "the real enemy in Whitehall" – the MoD.

All this was evident at the time – to the politicians and to the specialist correspondents like Michael White. Yet all of them chose to hold their fire, and focus instead on the Ministers, playing a dirty, devious and thoroughly dishonest game. And only now, are the likes of Arbuthnot – the Tory politician who no longer wishes to put Ministers in the frame - prepared to admit that the military was the author of its own downfall.

What I wrote on Sunday, therefore, is even more evident today. We have had and have now, two egregious failures. Firstly, Parliament – and the long-stop of the Defence Committee, failed to pick up what was going on. Secondly, the media likewise failed, and then failed to note that the Defence Committee was completely dysfunctional.

I despair in writing this. Even as I write, we have a three-ring media circus, centred around the proceedings of a select committee, chaired by an acknowledged crook, grandstanding for all it is worth.  The same failed system represented by the Defence Committee, reported by a failing media.

From it, nothing of any substance will come and, in truth, no one seems to care. The soap opera is everything. The hard, grown-up job of analysing what is going wrong, and coming up with serious solutions, seems beyond the capabilities of anyone involved.

We are going nowhere with this, and nothing will be solved. In due course, the circus will pack up its tents and move on to another show, and we'll be none the wiser. Except that, before this show is even over, real life outside the tent will take a hand. While these fools play, the economy and the world order is falling apart.

Damn them all to hell, for their foolishness, their stupidity and their venality. We deserve better than this.