Not a dent in him 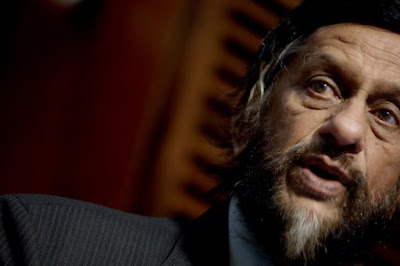 The key facts on global warming are already known and leaders should not wait for the next edition of the UN climate panel's report to step up action, says " the body's top scientist".

This is according to AFP, recording Rajendra Pachauri on a visit to Paris, ahead of a five-day meeting of the IPCC in Brest. The 4th IPCC report released in 2007, "is very clear" says Pachauri. "We have enough evidence, enough scientific findings which should convince people that action has to be taken".

"Based on observation, we know that there will be more floods, more drought, more heat waves and more extreme precipitation events. These things are happening", Pachauri added.

The man then goes on to "caution" that the "widely accepted goal" of preventing average global temperatures from increasing by more than 2.0 Celsius (3.6 degrees Fahrenheit) compared to preindustrial times is fast slipping beyond reach. To achieve that goal in a cost-effective manner "concentration of greenhouse gases [in the atmosphere] must peak not later than 2015," he says.

And with that, AFP tells us that the IPCC "weathered a firestorm of controversy in late 2009 and 2010" when several "minor but embarrassing errors" were uncovered in the massive 2007 report, leading to initiatives to tighten standards for inclusion and review of material. Pachauri, it says, was re-elected chairman of the IPCC in 2008.

Now, the point of all this is that, in Pachauri's own little world, nothing has changed. The dramas and controversies of climate change have passed him by, not ruffling a single hair on his bronzed head. The world has stood still.

And with the BBC also closing down on access, the hand-waver community is also making time stand still. Nothing, but nothing, changes in their world. We are not getting through to them.