The only acceptable diagnosis 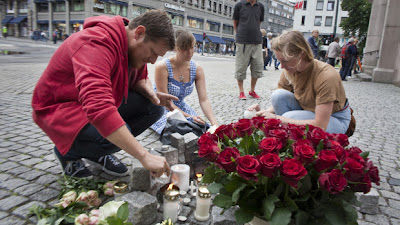 However, with Breivik having visited Bradford, having had a mentor called "Richard" and quoting from my work in his "manifesto", I am daily expecting my 5am courtesy call from West Yorkshire's finest. If I suddenly go off air without an explanation, that might be the reason.

Another point of interest is how far the Norwegians and the other political establishments go down the line of branding Breivik "mad". For some - particularly the Right (as it is known) - this would be a convenient diagnosis. Then, everything he has done and represents can be dismissed as the frothing of a madman.  The issues raised can be ignored and the discussion shut down.

To that extent, the label of madness cannot stick – not unless we care to expand it more widely. The deed itself – much as some would like to think so – was not mad, and nor was it evil if judged by the criteria which Breivik applies.

Those same criteria are not dissimilar to those adopted by the likes of Churchill and Bomber Harris, who night after night ordered the bombing of civilians in German towns and cities. Following in the trail, they are the same adopted by Blair, Brown and, currently, by Cameron. They adopt the simple, beguiling mantra of "end justifies means". If Breivik is mad, so are they.

What offends, therefore, it not the deed itself, but the fact that it was not state sanctioned. The killing of men, women and children is perfectly acceptable, as long as it is ordered by grave men in suits, sitting at tables in the offices of government, and carried out by men in pretty uniforms with lots of badges.

It is even deemed admirable if done at a distance with high-tech toys. The deeds are applauded and the bodies quietly buried. The men (and indeed women) involved even get shiny new medals for their labours, promotions, more badges and pensions.

Thus, Breivik's great "crime" was to breach the state monopoly on killing. You have to get elected before you are allowed to order killing on this scale. And then, only state employees may carry out the orders even to the extent of indulging in mass, indiscriminate killing. But if an individual conducts targeted slaughter, on the basis of his own careful analysis, he must be mad. It is the only acceptable diagnosis.