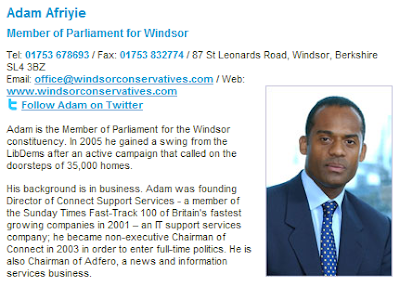 In the tradition of Madame Defarge, we continue to record the 274 MPs who gave away £9.8 billion of our money, with their votes. The next in our Hall of Shame is Adam Afriyie, a Conservative (In Name Only), supposedly representing the constituency of Windsor. His facebook profile is here.

Mr Afriyie, so he tells us, "is known for his thoughtfulness, honesty and plain-speaking style". He has, or so he avers, "the courage to lead from the front" and a determination to gets things done. As one of those faux Tory eurosceptics, he was proud to be London chairman of Business For Sterling - alongside George "Useless" Eustice - and a spokesman for the "no" to the Euro campaign.

Currently, Mr Afriyie's biggest bitch is the MPs' expenses system which, he complains is a "complete mess" and discriminates against less well-off politicians – like himself. He claims the new system forces some MPs to subsidise their work, leaving those who could afford it to continue unhindered while less well-off MPs, like himself, are brought into disrepute.

However, this concern for the less well off (himself) did not stop him tramping through the lobby to vote for giving our money away – much of it taken from those very few, desperately poor people who are less well off than himself. And his personal share of this smash and grab is £36 million, which he now owes us. As our candidate to celebrate Bastille Day, he can now consider himself Noted By Madame Defarge (NBMD). The knitting grows longer.