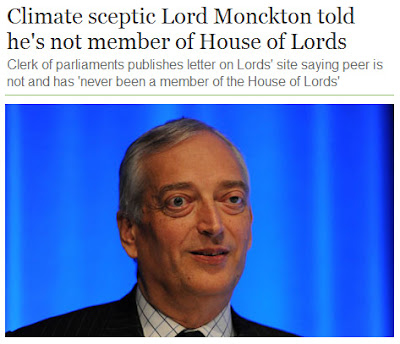 Back in 1999, when UKIP got its first three MEPs, we decided that, above all else, we needed to build credibility. It was too easy for our opposition to dismiss us as loons, and thereby trash an entirely legitimate case.

I like to think that, over the next few years, we enhanced UKIP's reputation, but much of the good work was destroyed in the crazy period after the 2004 election, when the Robert Kilroy-Silk madness dominated.

It got worse with the 2009 election, as electoral enthusiasm for the party was not matched by the quality of candidate – the selection process having been dominated by Farage, thereby ensuring a high proportion of compliant dross made it into the lists.

With such a handicap, however, you would have thought that the party could steer clear of the great pretender, Christopher Monckton, whom it styles as deputy leader and head of research. The man is and continues to be an embarrassment.

It really is hard enough pushing the eurosceptic agenda – to say nothing of the climate change argument – without being saddled by egregious self-publicists such as Monckton. But, once again, UKIP manages to do the wrong thing, giving succour to our enemies, scoring yet another own goal, as Monckton is publicly humiliated.

An axiom in politics is that your most dangerous enemies are invariably on your own side – something known since Julius Caesar and even earlier. To its credit, therefore, UKIP is at least maintaining a grand old tradition.