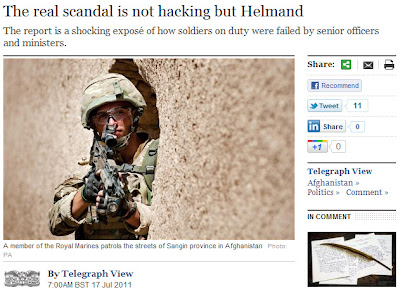 Grudgingly, one has to acknowledge that there is a small residue of adult behaviour left in The Sunday Telegraph, it having devoted a tiny part of its output today to a subject far more important than the media "self" obsession. And it has the grace to admit that it is far more important.

The real scandal, it thus says, "is not hacking but Helmand", as it comments on its own report of the Defence Committee report on Operations in Afghanistan, due out tomorrow - "a precise and shocking exposé of how British troops on duty in Helmand, Afghanistan, from 2006 onwards were routinely failed by their senior officers and government ministers". As scandals go, the paper says, it is among the very worst.

It has now been published online (although not yet as a .pdf) and I would concur with the generality of the comments, both in the report and the ST's assessment of it – but with several important caveats, not least the extreme superficiality of the report and its findings.

Most importantly, though, we are talking five years downstream, looking at what were predictable and avoidable flaws in the operation, which were clearly apparent at the time, and about which we were continuously writing. The committee records, for instance, concerns about protected vehicles, but only addresses this issue in terms of the Snatch Land Rover. Thus, it has Brigadier Butler say:


... we also knew before we deployed that we had something in the order of a 45 percent on average shortfall of vehicles. We had already identified that Snatch was not an appropriate vehicle for the desert. We wanted WMIKs and Pinzgauers, logistical vehicles, DROPS, container vehicles, equipment support vehicles, the small Scimitar CVRTs.

Butler is highly regarded in some quarters, but his comments here show a profound and alarming ignorance, and especially in respect of the WIMIKS, which were death traps, and the Pinzguaers (type pictured below), which could not have been more unsuitable if they tried. 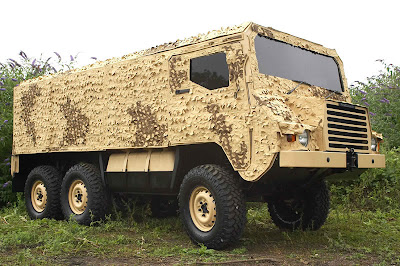 And this we were writing about with some force in June 2006 and in the following month when we accused that Army and MoD of corporate manslaughter.

But such is the bizarre superficiality of the Committee that, to guide it through the Labyrinth, it chose to interview General Mike Jackson, the man who did more than most to ensure that our troops were ill-equipped - the man who put the Snatches in Basra.

From a man who would, had there been any justice, been tried and shot for incompetence (pour encourager les autres), the Committee thus did take down these immortal words:


The tactics and equipment required in any campaign are to some extent dictated by the methods of the enemy. General Jackson (p42) explained that the Taliban had moved from direct fighting to the use of improvised explosive devices (IEDs) which had changed the need for equipment:

It took them rather longer, looking back, than one might have expected, but they obviously thought very hard, particularly after the second summer, 2007, and said, "We're not going to get anywhere taking on the British soldiers at what they do best; ergo we will find another way".

That brings us to the IED. That changes priorities on our side. Armoured vehicles suddenly go right up in terms of priority, because that is the way you protect the force. As I've already touched on, the dispersion put a greater premium on helicopters. Tactics and equipment will vary according to the operational circumstances. One has to respond. Ideally, you need to be one foot ahead, but that's not always possible.

The response to this, of course, is that it was possible to be "one foot ahead". Once again, we have to recall that, in June 2006 – over five years ago – Ann Winterton asked the defence secretary:

The answer then was a classic in studied complacency. Defence minister Adam Ingram responded:

It is thus not as if our fears and concerns were not known in parliament at the time, but as Ann Winterton constantly brought them up in the House, they were just as constantly ignored. Had they been noted and addressed earlier, many lives could have been saved. Why then, we ask, is it only now that we are seeing "a precise and shocking exposé" from the Defence Committee, and one which still seems incapable of getting to grips with some of the detail?

To answer that, we only need to look at the committee chairman, James Arbuthnot, and record that, time-after-time, under his tutelage, the committee has pulled its punches.

In the context where we expect the military to make mistakes (that is what the military does, and is best at doing), and governments to cover-up, the long-stop is parliament, represented in particular by the select committee system. And on this issue – as with many others – it has failed. But Arbuthnot is one of the "good ol' boys", part of the Tory defence claque, who certainly weren't going to let Lady Ann rain on their self-congratulatory parade, much less listen to "voices off" from the far North.

It is, however, a little unfair to put all the blame on Arbuthnot, as chairman. As we recorded last year, the system is broken - and there are multiple fractures. And now, as then, as the chatterati obsesses about entirely the wrong things, we have been almost a lone voice in saying this. Today, in Arbuthnot's report, we see the result – too little, too late, letting the guilty men off the hook, after good men have died unnecessarily.

And while one newspaper sees part of the point, it is not sufficiently adult to realise where the true problem really lies. As we pointed out last year, a crucial part of the scrutiny system - and especially where parliament drops the ball - is the media. Here, the Sunday Telegraph leader does at least acknowledge that: "Our own columnist, Christopher Booker, protested in 2006 at the outrage of British troops in Southern Iraq being sent to meet their deaths in lightly-armoured Snatch Land Rovers, in conditions which also applied in Afghanistan".

But, as it was at the time, while the newspaper allowed Booker to pursue the issue in his column – with the research carried out by myself – it offered us no support. Instead, its own defence correspondent, Sean Rayment, followed a conflicting line, pushing for more Warriors, a theme he was to return to, even as Booker was pushing for the mine protected vehicle solution.

Thus, in the absence of any real exposure from The Sunday Telegraph it was the Murdoch-owned Sunday Times that gave the campaign the necessary kick-start and got it moving. And when it came to the Pinzgauer, Sean Rayment was also out to lunch, having swallowed the Army spin and given the vehicle an outrageous puff. Thus compromised, he was never to offer a word of criticism against the vehicle.

There is the the other part of your problem. It is one thing having a broken system – but when the media does not recognises that, and then exacerbates it by failing to do its own job, there can be no attempt to fix what is wrong.

And when the media think that next week's select committee hearing is "historic", we know we have a long, long way to go. When parliamentarians start asking each other why they have failed so transparently to do their own jobs, then and only then would they be in a position to start looking at the media. So far, there is no sign whatsoever of this happening.