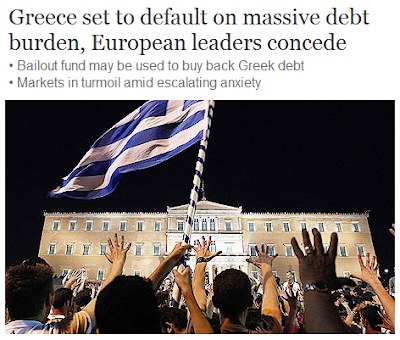 It appears that the market refuses to be baffled with bullshit any longer, says Zerohedge, as the Guardian grudgingly diverts its attention from "self", to report some of the details. European leaders, it tells us, "bowed to the inevitable" and conceded that Greece is likely to default on its massive debt burden.

So, for all their high salaries and expenses, their poncy titles, airs and frigging graces, these Mighty Captains of State have finally recognised that which we mere plebs he been telling them since the dawn of time. In the meantime, god knows how many slap-up meals they've had at our expense, how much damage they've done and how much grief they have caused.

And now, with the euro in freefall and these vainglorious poltroons moving on to do their magic elsewhere – is it Portugal or will it be Italy, Spain or even Ireland? – the Failygraph and the rest of the crapedia continue to play their games.