On a path to destruction 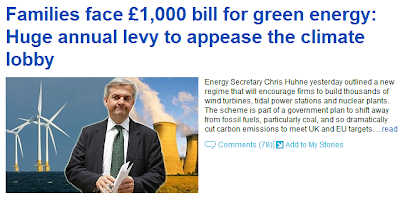 It is an alarming reflection on the madness of this coalition administration that unto the fool Huhne is given the power to destroy lives and our prosperity. Yet, this is the very same fool from whom The Failygraph took dictation and yesterday published uncritically the most amazing tosh, and has now given the story to that stupid woman Louise Gray.

The "reward" of yesterday's dereliction was to have the fool stand up in parliament at 4.20 pm and dribble. To achieve "our goals", Huhne declared, "we need to take decisive action now to increase low-carbon electricity generation, including nuclear and renewable energy as well as carbon capture and storage".

These "goals", according to this fool, will require £110 billion of investment, and will cost us an additional £160 a year by 2030, relying on the assumption that families will cut their annual energy use in the home by 30 percent over the same period.

Industry regulator Ofgem, however, calculates that the policy will cost more than £200 billion by 2020. It has also predicted a rise of 52 percent in retail electricity costs, equating to around £600 a year. Other analysts suggest that the true cost will be much higher, with average domestic energy bills set to double to around £2,000 a year.

Every indication is that we are looking at the higher end, with the costs of Huhne's renewables fantasy – on which he bases his policy – consistently understated and under-performing. Add his proposal to set a minimum price for electricity plus a "carbon" floor and "carbon capture", and this sets the scene for a doubling of costs.

At the heart of his policy, though, is knocking coal out of the equation, the most cost-effective form of generation we have. He is thereby massively handicapping the industry, and then has the unmitigated gall to tell us that what is left is "simply is not up to the job". In his terms, it thus needs "reform" – i.e., the building of new, more expensive "reserve capacity" to replace the capacity he has removed, thereby massively increasing costs.

Perpetuating what amounts to staggering dishonesty in a thoroughly dishonest speech, he then defines this "reserve capacity" as power plants "we can call on when demand surges". Without these, he tells us, we "would face a much higher risk of black-outs by the end of this decade". We would also be locked into a "worrying reliance" on fossil fuel imports, "putting us at risk of rising and volatile prices".

And thus, this wealth-destroying fool says, "consumers could end up paying more" – i.e., even more than the increase they will already have to pay.

Translating this tosh, Huhne's policy relies on four things: first, an effective ban on coal as a fuel; two, the provision of base load from nuclear; three, the use of renewables (mainly wind) for variable load; four, the provision of gas plants to provide back-up for when his renewables fail to deliver (most of the time).

As to the driver of this policy, it is not – as he claims – "the need to supply secure reliable, clean electricity for the future". First and foremost, it is to meet EU renewables and emissions targets. These are the "goals" he talks about – and only within this hugely limiting framework does he then allow the electricity industry to make plans to deliver.

And here, the arithmetic starts to unravel. Just his proposed offshore wind programme is set to cost about £50 billion, to deliver a theoretical 18GW but in fact only about four – less than five percent of the total estate. By the time he has finished, a £200 billion requirement looks modest – twice Huhne's estimate of the capital required to achieve his goals, itself inflated by the premature retirement of existing coal plants.

The point that must be made, though, is that his "goals" are not our goals. They have not been presented fairly or honestly. They have not been put to an electorate in the form of any explicit manifesto, and they have no mandate. They are a highly contentious imposition from an unpopular coalition government, which has no majority support.

This, in fact, is as close to dictatorship as we have yet come. Doubtless we will move closer through the term of this vile parliament – one which yesterday "congratulated" this fool, and from which any voice of real dissent was missing.

It is thus all very well to point the finger at Huhne. But, as with the wholesale larceny of our money the day previously, this mad policy requires collective approval. And Huhne's very tenure relies on the approval and support of Cameron, who enthusiastically endorses his work.

Rarely has the electorate been so completely disfranchised. Rarely have government and parliament gone about their tasks in total defiance of the mood of the nation, stacking up unwanted costs for a minority obsession that lacks any scientific credibility or electoral legitimacy.

Yet, nothing which is said or done over the next few months or years will have the slightest impact on our dictators. They have spoken. They have given their assent, and that is how it is going to be. And, in the fullness of time, we are going to have to destroy them because, if we do not, they are set on a path to destroy us. And not one whiff of this will you get from Louise Gray and the Failygraph.