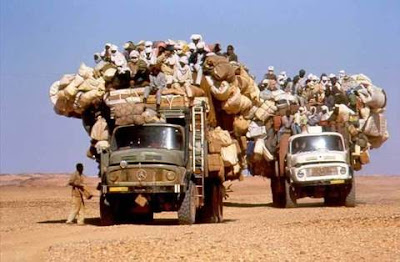 I was actually rung by a London-based BBC World Service journalist yesterday, inviting me to go on a discussion programme that evening, to talk about the select committee hearing.  "A lot of our overseas listeners", he said, "are amazed at the amount of coverage that was being given to this issue".

My response was that you did not have to be overseas to feel that way.  Here in Yorkshire, 200 miles from the bandwagons (pictured above), it felt as if we were on a different planet.  Don't get me wrong here.  This issue is not unimportant. What is wrong is the totally disproportionate coverage. And yes I did check ... there has been far more media coverage today than was given in the newspapers to the outbreak of the Second World War.

Yesterday, incidentally, was the 71st anniversary of Hitler's "Last Appeal to Reason" speech in Berlin, addressed to the British people in the hope that they would force their government to "see sense" and sue for peace.  I don't know if there is a foreign dictator up to doing the job now (appealing for reason), but he would be wasting his time, I fear. In 1940, reason prevailed - contrary to Hitler's expectations. It has now departed.

With that, I departed for a short time ... to rant on the BBC World Service. During the broadcast discussion, in a two-hander with a Financial Times journalist (Franks? - I didn't quite get the name), I had to listen to the "bubble view".

Basically, this was how our free, tireless independent press, and in particular, the brave and dogged Guardian had left "no stone unturned" to expose the evil machinations of the evil Murdoch Empire (did I say evil?), as a result of which "changes" would be made to the way we are governed, there would be a better relationship between the media and government, the sunlit uplands beckoned, and it was all rather jolly and healthy - or words to that effect.

I dunno if everyone is like this, but I always have the greatest difficulty recalling what I say when I broadcast, but I am pretty sure the words "fantasy" and "bubble" passed my lips. In particular, I spoke the single issue obsessions in the media - that while the entire media was peering obsessively under one stone, hundreds of other stones were left unturned.

The phrase "lost it" also may have escaped once or twice. However important it might be as a story, this one is not so important that it should be reported almost to the exclusion of all else.

Interestingly, in UKIP, we were accused of being a single-issue party. Now we have a one (at a time) issue media ... that issue being mostly itself. We now look at newspapers in astonishment, I told my Radio Leeds host, and turn to the internet to find out what is going on. And I haven't even started on the politicians.

Now, I don't always agree with this man, but he is a bloody sight closer to the truth than any dozen of the clattering hacks and pols ...

The odd thing here, though, is that the pols keep talking about the "power" of the press. Yet print media is a dying industry - its power is waning. The great "Thunderer" is a joke, the Failygraph editorials pitiful and the others barely read. Who cares what a dim, ill-informed journo writes in an editorial, when more often than not the comments are better informed than the original piece?

Crucially though, as I wrote the other day, the media (BBC included) is now only "powerful" inside the bubble, where the pols live. But because the bubble-dwellers can't see anything outside the bubble, they simply cannot understand how limited their world really is. To expect otherwise is like asking a goldfish to describe the world outside its bowl.

Politicians and media both, therefore, have become obsessed with "self" and, because that is all that interests them, and they have no broader horizons, they assume - wrongly - that everybody else shares their interests and obsessions.

Having returned for more keyboard pounding, even as I was writing, up popped this on my Skype instant messenger. This is a superb analysis of the coming energy crisis which, amid its technical evaluation, tells us this:


Among the chief dangers that the UK faces in 2011 is the critical obsolescence of its electricity infrastructure, its essential bankruptcy and the absolutely unrealistic aspirations of almost its entire political class, although not its population, for a new, low-carbon, high-growth, job-creating, tax-paying economy.

You might have noticed that recently I have stopped calling them the "political classes". My preferred term is "Scumset". My friends and colleagues warn me that I should not write about rising up and slaughtering them. But, I ask, what else is there to do when this creature has stopped listening, cannot listen - and, given half a chance, will kill us all?

Thus, as the pols and the media lose it, we the people are losing the battle for good, fair governance, a free, intelligent and responsible press, and our fight for an independent nation. Yet "we the people" actually do deserve some of what we get, because we are unable yet to rise up. But if anyone, like our Financial Times fantasist, thinks this is a healthy situation, they have done more than lost it. They are barking mad.

So saying, I really think I've had enough of this day. I'm going to mark this post up as my "horlix" and retire hurt. In the meantime, we are seriously screwed, according to Ambrose. We mock him occasionally, but only in a friendly way. We are screwed.

Today also I have things to do in the real world, and in this artificial one you can only beat your head against a brick wall for so long. But the battle will continue, once we have offered up our ritual prayer to St Jude. You can actually get to like bashing your head against the wall, I am told.