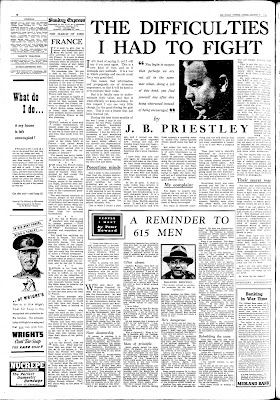 Now having had time to scan, albeit briefly, the "manifesto" offered by Anders Breivik (under his Anglicised name of Andrew Berwick), what leaps from the pages is his grand proclamation of, "What you need to know, our falsified history and other forms of cultural Marxist/multiculturalist propaganda".

What Brievik has concluded, like many of us, is that the history fed to us as the record of fact is largely false, so distorted as not to represent in any way a true or reasonable account of our past. And thus aware, he has sought to rewrite history in his own fashion, telling us what he believes to be the truth.

Then, by way of a publicity stunt to launch his book, he detonates a large bomb and then shoots over ninety people on a remote Norwegian island.

Well, if the intention was to grab our attention – and it clearly was – then Mr Breivik has succeeded. But as a way of selling his ideas, this is probably less than effective. Such good sense as he might have offered is now so tainted that anyone now seeking to promulgate his version of history will find it more difficult than ever before.

The deeds perpetrated by Breivik, therefore, are the hallmarks of failure. One does not need to make moral judgements – and neither can one resort to high moral imperatives, declaring all killing to be wrong. If that is your way, step forward Messrs Blair, Brown and Cameron – three men with blood on their hands in far greater quantity than Breivik.

Simply, if Breivik wished to communicate a message, this was not the way to do it. He will be remembered for his deeds rather than his words, the latter being rejected – which rather defeats the object of the exercise.

The great problem for us though, as Breivik correctly identifies, is that our history remains false, and it was the pursuit of that idea which has kept me quieter than usual for nearly a week.

What started the process was my going through my existing newspaper archives, page my page, checking to see if I had missed anything of great importance for my book. And I had, a brief reference in the Daily Express of 26 October 1940, to an article in the Sunday Express (pictured - click to enlarge to readable size. The article underneath is also interesting), with reference to many more. It was acquiring the microfilm, converting the film to readable format and then doing the rewriting which took the time – all against another of those impossible deadlines.

The thesis, which has emerged in the book that I have written, will now be published by a reputable publishing house. The book will be distributed and sold. There will be reviews, some serialisation, broadcasts and television (I hope), and I plan to do a series of talks and road shows, plus my blogs and other material, all to spread the word.

And that is how you do it. If the ideas are sound, they will be picked up and spread. With driving minds behind them, they will prevail. And that is the way you communicate ideas – not by killing people. The latter is what fundamentalists do, and that is why they always fail in the end. We have to succeed. And there are no short cuts.

So I'm back in business - tired ... in fact almost dizzy with fatigue. But I'm back.