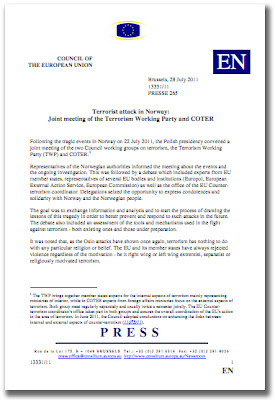 Time magazine sums it up by stating that, in all probability, Breivik most likely acted alone. And to many, it then says, "it may come as a relief that Breivik's claims of being just one of several killer cells in some wider conspiracy for global domination turns out to be nothing but a web of deception spun by a brutal killer".

But – and there always is a "but" - investigators and counterterrorism officials are not relieved. They fear that Breivik represents a new, potentially deadly paradigm shift in the world of extremist violence – the "Lone-Wolf Terrorist".

Now, if Breivik had been part of a group, there would most certainly have been calls for more action to contain his form of terrorist. But the investigators and counterterrorism officials are certainly not going to let a "paradigm shift" go to waste. This too "may need more government attention", we are told by the Bloomberg agency.

And behind this is the masterful exploiter of the "paradigm shift" – none other than the European Union determined to turn these killings into a beneficial crisis.

Thus the Polish presidency convened a joint meeting of the two Council working groups on terrorism, the Terrorism Working Party (TWP) and COTER.

And after representatives of the Norwegian authorities informed the meeting about the events and the ongoing investigation., there was a "debate which included experts from EU member states, representatives of several EU bodies and institutions (Europol, European External Action Service, European Commission) as well as the office of the EU Counterterrorism coordinator".

The Oslo attacks, concluded these great sages, proved that "terrorism has nothing to do with any particular religion or belief". Thus, particular attention was given to the processes of radicalization and recruitment.

But the real meat was the issue of "lone-wolf terrorism", represented by terrorists that are self-radicalised (e.g. through the internet) with no obvious attachment to any terrorist organisation.

This, they say, seems to require increasing attention. And, of course, the "experts" have decided that, in confronting the threat of a terrorist attack, regardless of its underlying motivation, the effective exchange of information is vital - lots more meetings in agreeable places, with plenty of long lunches.

Then we get the payoff line: "The importance of strengthening response capacity was another issue that was highlighted". Needless to say, it is that "response capacity" which the EU will be only too happy to provide ... another job for euro-plod.

But it is also a wide-open invitation for local plods to bear down on individuals who mind their own business and have absolutely no links with any actual or suspected terrorist organisations. The very fact of the absence of such links is now sufficient to invite suspicion and action. After all, if they have absolutely no contact with other terrorists, that proves they are "lone wolves".

And there we have it. For the officials, whatever the event, whatever the crisis, there is always a reason for intervening. And this one is a beauty: no one is now safe from the finger of suspicion, and the long arm of euro-plod. Absence of evidence is now evidence.

As did one of the "colleagues" once suggest a statute to the "great integrator" Nasser, one can see them putting up a statue to Breivik. He has given them all they need.